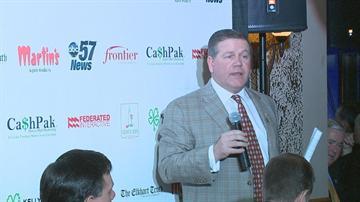 SOUTH BEND, Ind. – Over a hundred people filled Parisi’s Ristorante Italiano on Thursday to get the inside scoop on the 2012 Notre Dame Football Team from Head Coach Brian Kelly. His foundation Kelly Cares put on the 2012 Post Signing Day Dinner and Fundraiser where fans got the chance to talk to Coach Kelly.

Brian Kelly and his wife Paqui talked about the foundation in front of the packed room and then Coach Kelly let the crowd in on some Notre Dame Football news.
Kelly and his staff added 17 players to the roster on Wednesday as part of National Signing Day. This included 16 high school seniors, and one transfer.
Kelly said at the fundraiser that he gets to offer a unique opportunity to recruits different than any other in the county.
One of the biggest surprises of signing day happened when Deontay Greenberry chose not to sign with Notre Dame, but instead inked with Houston.
Kelly said he was asked a lot about if he was disappointed when “a young man,” chose not to sign with Notre Dame. He told the crowd he was disappointed for him that he lost out on an opportunity to come to Notre Dame because it’s something special.
One unique side of Notre Dame was evident Thursday night, and that was the sense of community by the number of former players who came out to support the cause.
The former Irish said they were happy to be back in South Bend and show support for the Notre Dame family.
"You want to be there to be able to give back because that’s what Notre Dame is all about,” said Reggie Brooks.
Of course the alumni have been paying close attention to the 17 new recruits Notre Dame signed.
"You certainly pay attention to it to Notre Dame, and we have another successful recruiting class. We're really excited to get the young guys in, start influencing them as soon as humanly possible, let them know the standard that we have here, at the university.” said Derrick Mayes.
Heisman Trophy Winner Tim Brown said he remembers why he signed with Notre Dame.
“My mom and dad were looking for a place that was strictly education and out of all the schools I was speaking with, Notre Dame was the only one talking education first,” said Brown.
And when asked if he wanted to see another Irish get the Heisman Trophy…
“I do. I have enjoyed this run. I have to admit that I have, but certainly I would like to see somebody put another trophy in the place up there. So it'd be great,” said Brown.
Kelly said they’re happy for all the support for the community they’ve received for their foundation. This is just the second year for the fundraiser, but don't think it's going any where any time soon.
“We love being here, we love being part of South Bend, and we’re going to win more games so we can stay here longer,” said Kelly.
The Kelly Cares Foundation supports programs that mirror their family values of health, education, and community. They’re well known for supporting breast cancer research and prevention. Paqui is a two-time breast cancer survivor.
Share this article: