Coach Kelly: This year's team more unified on and off the field 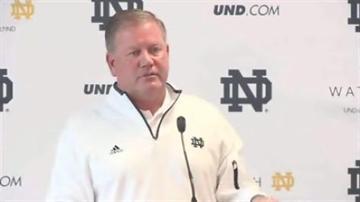 SOUTH BEND, Ind. -- Notre Dame Head Coach Brian Kelly says he has no doubt his players are ready to take on Temple during their first game of the season. He says his players are hungry to get the season started.

"If we do it like we did it last year, we're going to be an 8-5 team because everybody has taken their motivation off of what we did last year and have worked harder," said Coach Kelly.

A new season, a new ballgame for the Fighting Irish.

Coach Kelly says this team is more unified, both on and off the field.

"Our practices run so much better on a day-to-day basis because we're all on the same page and we're all speaking the same language," said Kelly.

Cornerback Bennett Jackson agrees there's something different about this season.

"I wouldn't say there's a bad feel to this team, but it's definitely different than it was last year. We just have a different view, different characteristics as a unit," said Jackson.

Coach Kelly says the entire program has evolved over the last few seasons.

"The whole football program has changed over the last few years under my leadership, and I have changed as we have grown together," said Kelly.

Players say although they're pumped and anxious for next weekend's home opener versus Temple, right now they're focused on taking it a day at a time while they prove themselves on the practice field.