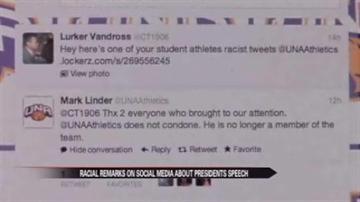 One college football player is without a team after making racist remarks on Twitter about President Obama.

Obama's speech live from Newtown preempted the first half of the 49ers vs. Patriots game on NBC and a lot of folks took to Twitter very angry using some colorful language.

One person was Bradley Patterson, a walk on football player from the University of Northern Alabama.

Monday he was kicked off the team for his racial slur used against the president.

The athletic director said he hopes this is an example to other athletes that they take social media seriously and will not tolerate such remarks.