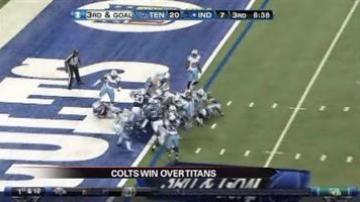 INDIANAPOLIS. -- Colts fans are rejoicing Sunday night as Indy pulled off another close win over the Tennessee Titans.

Titans were up 20-7 at the half but the third quarter was a charm for the Colts.

First Delone Carter gets the carry and scores. Colts down by 6 points. Later during a Titans' possession, Indy's Cassius Vaughn gets in the way and scores.