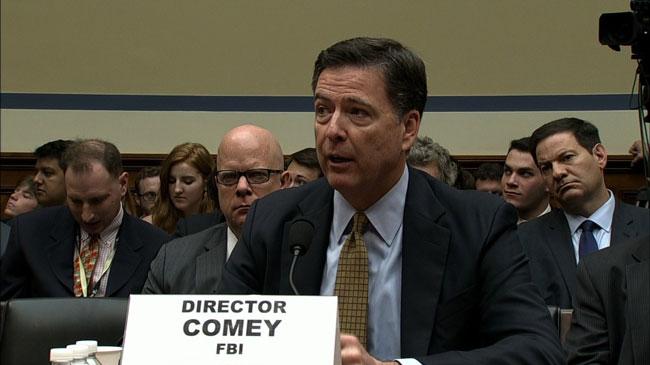 Comey was the sole witness at a politically charged hearing on Capitol Hill, convened by GOP lawmakers angry about his failure to recommend charges for Clinton over her use of private email servers as secretary of state.

"The decision was made and the recommendation was made the way you would want it to be by people who didn't give a hoot about politics but who cared about what are the facts, what is the law and how have similar people, all people, been treated in the past," Comey said.

While Comey was the witness, Clinton was clearly the target, as Republicans work to keep the controversy over her email setup alive and highlight her top political vulnerability running up to November's election -- questions about her character and honesty.

Republicans repeatedly asked Comey questions that were designed to force him to reprise the more politically damaging aspects of his unusual public statement on Tuesday in which he said she was "extremely careless" in handling classified intelligence on her homebrew email server.

Jason Chaffetz, the Republican chairman of the House Oversight and Government Reform Committee, complained that Comey's withering criticism of Clinton on Tuesday did not square with a decision not to recommend charges.

"We are mystified and confused by the fact pattern that you laid out and the conclusions that you reached," said Chaffetz in his opening statement.

"It seems to a lot of us that the Average Joe, the average American, that if they had done what you laid out in your statement, that they would be in handcuffs and they might be on their way to jail. I think there is a legitimate concern that there is a double standard. If your name isn't Clinton and you are not part of the powerful elite, that Lady Justice will act differently," he said.

Democrats complained that Republicans were simply embarking on yet another attempt to use taxpayer cash to wound Cinton, the presumptive Democratic presidential nominee.

"Amazingly, some Republicans who were praising you just days ago for your independence and integrity and honesty instantly turned against you because your recommendation conflicted with the predetermined outcome they wanted," said Rep. Elijah Cummings, the committee's ranking Democrat.

"In their eyes, you had one job -- and one job only -- to prosecute Hillary Clinton," Cummings added. "But you refused, so now you are being summoned here to answer for your alleged transgressions."

Before the dramatic opening exchanges of the hearing, Comey pulled himself up to his towering height and raised his right arm and swore to tell the truth.

He testified when prodded by Chaffetz that Clinton did not lie to the FBI and explained that the agency did not want to "put people in jail unless we can prove they knew they were doing something they shouldn't do."

And, following Attorney General Loretta Lynch's announcement Wednesday that she would accept the FBI's findings and close the case, he explained the legal distinction that underpinned his decision not to seek charges against Clinton.

"My conclusion was and remains that no reasonable prosecutor would bring .. the second case in 100 years for gross negligence," Comey said.

He explained that under the relevant statutes, prosecutors would have to prove Clinton clearly knew she was breaking the law to win a case.

Republicans repeatedly tried to get Comey to say that statements that Clinton had made in public about her use of her server were false. Chaffetz told him that the FBI would soon get a request to examine whether Clinton lied to Congress when she said never sent or received by email anything marked classified.

Comey also raised eyebrows when he commented about Clinton's understanding of the mechanics of classification, when he said that it was possible that she did not know that the marking 'C' in the body of an email denoted that it was classified.

Republicans are trying other avenues to attack Clinton. House Speaker Paul Ryan asked the Office of the Director of National Intelligence to block access to classified briefings for Clinton for the rest of the campaign.

And Trump on Wednesday renewed his accusations that the result of the FBI's probe of Clinton was evidence that the governing system was "rigged" in favor of establishment elites.

During Thursday morning's hearing, Clinton met at her home off near Embassy Row in Northwest Washington with her top adviser Cheryl Mills.

As far as the Clinton campaign is concerned, Thursday's hearing represents yet another attempt by GOP lawmakers to trip their candidate up, after the House Benghazi Committee concluded last week without directly implicating the former secretary of state in the deaths of four Americans in Libya in 2012.