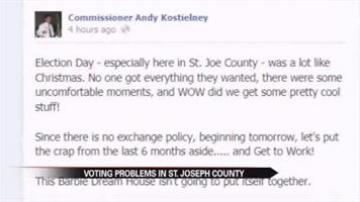 ST. JOSEPH COUNTY, Ind. -- From ballot shortages, to confused voters, to incorrect ballots, ABC57 set to find out why there was so much trouble on Election Day and if the same issues can be avoided in the future.

It seems like communication was a big issue. The acting clerk, Rita Glenn, did not know specific details about problems that occurred Tuesday.

Wednesday morning, Andrew Kostielney, president of the St Joseph County Commissioners, weighed in on Facebook about the outcome of the general election.

He wrote, "Election Day, especially here in St Joseph County, was a lot like Christmas. No one got everything they wanted, there were some uncomfortable moments, and wow did we get some pretty cool stuff."

For the most part Kosteilney was writing in generalities, but recognizes things in St Joseph County did not go as smoothly as they should have Tuesday.

"Anytime a voter is not able to exercise their right to vote that they're able to, that's a problem,” said Kostielney.

Even though every single vote cast Tuesday was counted, some voters were given the wrong ballot in Mishawaka.

That means they did not get to vote for their school board and instead they voted for someone else's.

Rita Glenn was acting as the county clerk Tuesday night.

"It might be something that we will have to concentrate harder on when it comes to school board elections in Mishawaka-Penn. It's a very small area, but it's an important deal, but it's just a training issue,” said Glenn.

It appears as if the results of those school board races will stand since there is no way to tell which ballots were incorrectly cast.

"I'm not real sure how it can be avoided and/or fixed, but we will be moving in a direction to make sure that it won't happen again,” said Glenn.

She couldn't give specifics, but Kosteilney had an idea of how to fix the problem.

"What we'd like to see is, beginning in 2013 we'll explore the vote center concept; so hopefully by the primary of 2014 we'll go to vote centers and a lot of the issues we saw yesterday will no longer be an issue,” said Kosteilney.