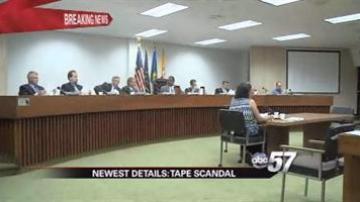 SOUTH BEND, Ind. -- The local activist group, Citizens United for a Better Government, made their voices heard at the last common council meeting, demanding the firing of Lt. David Wells and Commander Tim Corbett with the Metro Homicide Unit.

The 31-year-old died in police custody early in the morning on July 22.  Anderson was pulled over by police near the intersection of Calvert Street and Dale Avenue and officers say he tried to run.  According to the officers they unsuccessfully tried to use a taser on Anderson. Officers eventually caught him and he died after choking on a bag of marijuana that he tried to swallow.

Activists demanded that, as elected officials, the county council investigate the matter and suspend the Metro Homicide Unit's funding until an investigation is completed.

The demands are closely related to the South Bend Police Department's ongoing tape scandal. Activists say Commander Corbett is on the tape recordings making racial remarks. Tonight, the community stated they felt Corbett and other investigators within the MHU have lost their credibility with the community because of the alleged racial comments.

County Council members agreed the concerns brought forward by community members at the meeting have raised some serious concerns and said they now have no choice but to look into these claims further.

President of the County Common Council, Rafael Morton said, "First things first, from the interaction and the questions asked from just about everyone on the council this evening, it has shown me that there is some real and genuine interest in at least looking into these matters. We need to have some conversations, whether that be with our legal council or other members of the city council to hopefully create some kind of collaborative effort".

Morton said he will be meeting with the county council's legal council to determine what action the council can take, but Morton did say that suspending funding is not an option. Morton also said the council will be having informal discussions in the future about what other actions they can and will take. Options include how to facilitate an investigation into the Metro Homicide Unit and Anderson's death by having an outside party such as the Attorney General.

Activists and community members said Tueday night's meeting was a step in the right direction and are happy to see that the county council wants to support their efforts to not only get the tape recordings released, but to get answers into Anderson's death.