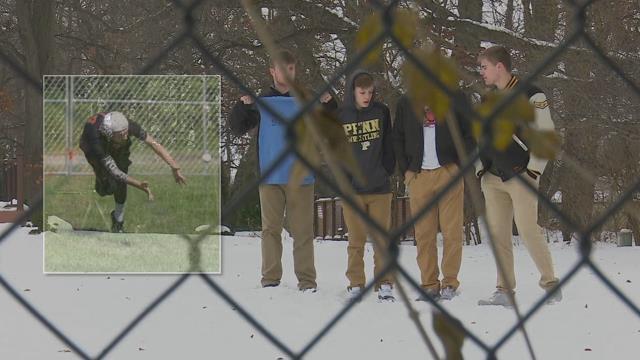 A community is mourning the loss of a Granger teen killed in a car accident Tuesday night. Some of his family, friends, and a FACT official on the scene only spoke with ABC 57’s Jess Arnold.

“Still definitely like don’t think it’s real. It’s kind of weird to think that I could wake up tomorrow and not have my brother,” said Cameron Snead’s brother, Daivyn Davis.

“Me and my friends were driving back home, and I remember we had our headlights on, and it was like black ice, very slippery out, and right when we got to the roundabout, we saw two cop cars go right past us and little did we know that it was Cam and Brandon,” said Cameron Snead’s friend, Jakob Hazen.

16-year-olds Cameron Snead and Brandon Campbell were driving down Buckeye Road in Granger, when they lost control of the car, and slid off the road, hitting a tree, and killing Cameron.

“I was talking to him just a couple hours before, and yeah it was just complete shock,” said Cameron’s wiffle ball teammate and friend, Griffin Smith.

That shock was coupled with devastation at the loss of their lifelong friend and wiffle ball teammate.

“It’s just crazy, because Cameron’s been my backdoor neighbor my whole life, and right when Brandon moved in, we were best friends, and we’ve been best friends since,” said another one of his teammates and lifelong friends, Tyler Seroczynski.

They were best friends and wiffle ball teammates. They talked to me while standing on the pitcher’s mound—Cameron’s home twice a day during the summer.

“It’s more than just a backyard to us. He just did so much for the field and just for all of us as a whole,” said Griffin.

Every time they step foot on the field, Cameron will be first on their minds.

“He was so friendly to everyone. I can just hear his laugh right now and his smile,” said his teammate and friend, Brett Shepard.

“He’s one of those guys that like oh I can tell that he’s just a funny guy,” said Cameron’s brother, Daivyn Davis.

“He’s up in heaven right now, because he made so many people happy,” said Tyler Seroczynski.

From now on, his teammates say they’ll be playing for Cameron.

“You know, we’re going to definitely play the season for him, because he meant a lot to us,” said Tyler Seroczynski.

This tragedy has also affected the FACT officials working the investigation.

“This is only a uniform. It’s not a shield,” said SBPD Lieutenant Gene Eyster, who is also a FACT official.

“We’re human beings. It’s just that we have a duty and an act to perform, and we literally go through the motions,” he said.

Lieutenant Eyster just always hoped he’d never have to break such terrible news to someone he knew.

“It’s always tough for us as human beings. It adds an additional stress level when it’s someone we have a personal relationship with,” he said.

He’s familiar with both Cameron Snead’s and Brandon Campbell’s families.

“I think what brings these to here to the forefront most off is the age of the individuals involved. It’s a tragedy when somebody as young as these people have lost their lives. And the fact that it’s the holiday just accents the pain and suffering that the families are going to go through. It’s hard for them, I would imagine in the future to have a normal holiday season knowing that this is an anniversary of such a loss,” he said.

Tuesday night’s crash marks the 25th time FACT has been called to a crash this year.

“It’s to some degree frustrating, because a lot of these cases, the two that we had as well as some others locally, Cass County, Berrien County, La Porte, they’re weather related and inexperienced drivers, and some of that there’s no way to overcome,” said Lt. Eyster.

He says all his team can do is be there for the families.

“You just have to let them know that you’re there to comfort them, and it’s in sincerity that we’re there as long as they need us,” said Lt. Eyster.

If you'd like to help with funeral expenses, you can donate by clicking here.