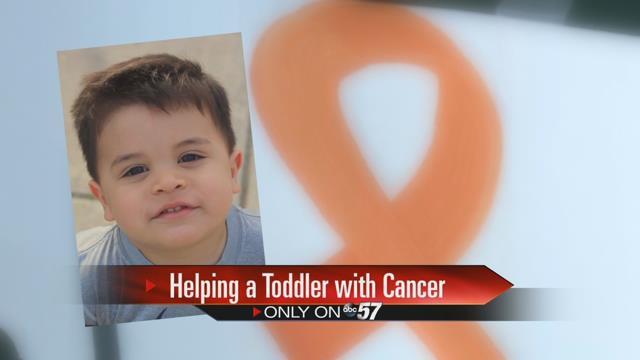 Michiana has shown their support for a family who has a little boy with cancer.

Gabe Rodriguez is only 22 months old, but was diagnosed with Acute Lymphoid Leukemia earlier in June.

Since then his family has had to figure out how they are going to pay for all the upcoming medical bills.

“Since we got the diagnosis it's just been a rocky road, at the end of the day support was needed,” said Gabe's parents, Katie and Santiago Rodriguez.

However, after the word got out about little Gabe, the community has come together to offer a helping hand.

On Sunday, a "Cut A Thon" was held at Studio C Salon in South Bend.

For a $10 donation, people who showed up were able to get a cut and wash.

They had orange t-shirts, hair bows, and ribbons that could be bought to raise money for the family. There was also a silent auction and other items being sold to raise funds.

“I was just really overwhelmed how they all just came together and they put this together. It's a great group here,” said
Colleen Vanfleit, Owner of Studio C Salon.

Vanfleit is Gabe's aunt and is thankful she is able to open up her business to help.

“Everyone has just shown up and been ready to raise some money. The whole community has just been amazing," Vanfleit added.

The event brought out a large crowd of people. In total, the salon did 200 cuts and raised about $18,000 that will help offset all the medical expenses.

12-year-old Paige Urbanski came to get her hair cut.

“It's for a good friend Gabe, he was diagnosed with Leukemia. It's a fundraiser to help him find a cure,” said Urbanski.

She said she was happy to be there for a friend.

“To me it feels good because I know it's for a good cause,” Urbanski added.

Gabe has already started the first phase of treatment which will last 30 days. After that, doctors will determine what further treatment needs to be done.

"What happens next is all based on his response to the therapy. Once we get more information on that then the doctors, who have been awesome, will start to guide us down a path which will be appropriate," said Santiago.

His parents described the support they have gotten from everyone during this time is overwhelming and that they are so grateful.

“I feel like right now this community is my family because of all the support we've received and it's just so awesome,” Katie said.

“We owe a lot of people a thank you but given the events there's not enough time in the day to thank all of the people who have contributed. So to all the folks who have thought about us and given our little Gabe prayers, we appreciate you,” said Santiago.

People can also donate to PNC bank under the Gifts for Gabe account.