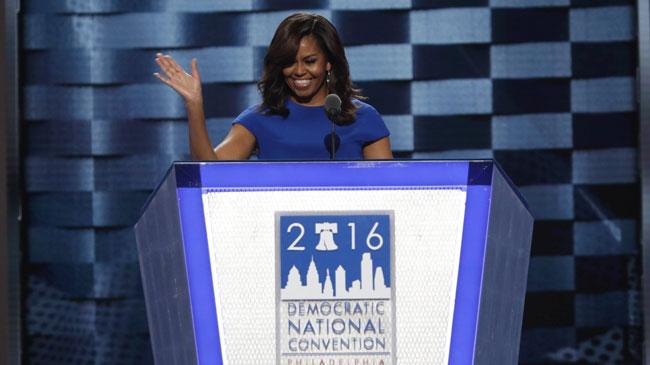 WASHINGTON (CNN) -- Politicians across party lines, celebrities and activists praised Michelle Obama for her Democratic National Convention speech, with some saying the remarks "embodied everything that is great about America."

New Jersey Sen. Cory Booker, who spoke before Obama, praised her speech for its "spirit."

"I think that what people expected was a speech, but what they really got was a sharing, a convening of spirit. And when she talked about her kids, that really affected me."

"The Obamas were the first African-American first family that we had, and they did not eradicate racism in this country. We do not live in this post-racial society, where race doesn't matter, where the struggle is not there for people of color in this country," she told CNN's Chris Cuomo on "New Day" on Tuesday.

"And I think Michelle Obama went up on that stage and embodied everything that is great about America," Symone Sanders added. "She gave us hope, but she also told us we still have work to do."

Obama's public speaking became a topic of national attention even before the Democratic National Convention when the previous week, Melania Trump's speechwriter admitted to plagiarizing the first lady's 2008 DNC speech.

"I'm saying this as a partisan who takes the other side seriously; this speech is a grand slam for Dems. Over the back wall, ball in orbit," he said.

"Seriously republicans are very lucky michelle obama says she has no interest in running for office," he tweeted.

Comedian Michael Ian Black compared the first lddy to one of the world's biggest artists.

Conservative writer and radio host Erick Erickson predicted that Obama's speech would be the best of the night.

"I don't think anyone is going to top that speech by Mrs. Obama," he tweeted.

Singer Janelle Monae was at the convention and sent off several tweets praising Obama.

"Tears. Chills. @MichelleObama #DNC so honored to be here," he said.

"Hillary Clinton does not deserve the speech Michelle just gave her. Hit it out of the ballpark," said the daughter of Sen. John McCain, the 2008 Republican presidential nominee.

And Obama's husband, President Barack Obama, couldn't help but also get in on the praise.

"Incredible speech by an incredible woman. Couldn't be more proud & our country has been blessed to have her as FLOTUS. I love you, Michelle," Obama tweeted Monday night.