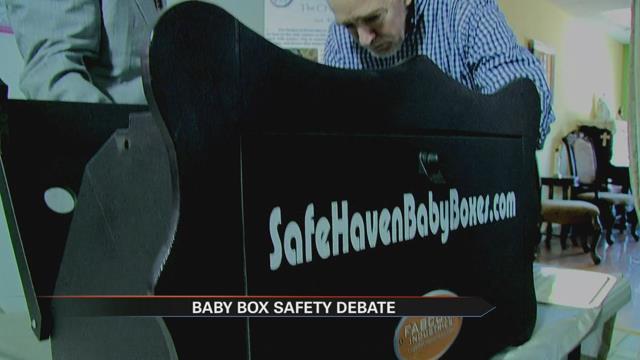 A controversial “safe haven baby box” will be installed at the Life Center in South Bend most likely by the end of July.

The creator says it’s for mothers who feel they have no other choice than to anonymously give up their newborn babies.

But local leaders and state officials say it is illegal.

“Certainly a box is better than a trash can but there are even better solutions than that,” says CAPS President and CEO, Cindy Yoder.

CAPS is an organization that serves parents and children in need in Michiana.

“It’s much better to hand a baby to a person. Especially newborns can have so many unknown medical or health issues that unless a person is right there, things can go bad so quickly,” said Yoder.

And it sounds like that person-to-person hand off is the law.

The law requires a person abandoning an infant to surrender the infant to an actual person, defined as an emergency medical services provider.

In a letter sent to the founder’s lawyer the Department of Child Services states that the baby boxes are not an authorized way to protect abandoned infants under the current law and that they respectfully ask the founder to take them down.

“They’re interpretation of the law is different that ours. You can ask any attorney the statute is not clear,” said Safe Haven Baby Box Founder, Monica Kelsey.

“All we are about is helping woman and children. That’s what DCS is about. That’s what the Department of Health is about and we hope that door is open soon.”

Kelsey, who is also a firefighter and paramedic, says a signal will alert emergency service providers immediately with a short response time.

"As soon as the mother opens the door to the box, the first 9-1-1 trip goes out. The second trip is when the baby is placed on the inside of the box, there are motion sensors inside. And we've also placed on the inside, a button for the mother to push. Once she closes that door. The door locks. So once she closes that door, even she can't get her child out. She has to wait for medical and fire if she changes her mind," said Kelsey.

She says it doesn’t matter what the box is made of and that the alternative is unacceptable.

“As long as the box is safe and its been tested. Looked at by multiple designers. But its only going to house the child for only three to five minutes. The alternative to that is a dumpster. Which the child could be in for hours and probably found deceased,” said Kelsey.

there are options before it gets to that point.

“Many options before the point of last resort. And even when a parent thinks that’s the last leg they have, they can always reach out to somebody, hand that baby to a paramedic and walk away,” said Yoder.

Despite the concerns and push back, Kelsey says there are plans to put two more baby boxes in South Bend and up to 30 more regionally and nationally within the next year.