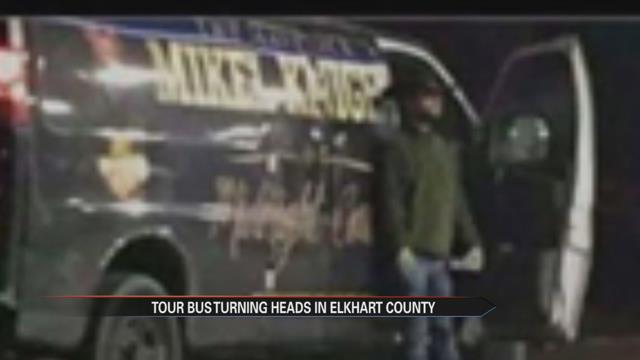 Horn saw the bus in an Elkhart Kmart parking lot, with men in front of it flagging down drivers.

“There was quite a few guys,” Horn said.

Those guys were said to also be at the Goshen Gallop Wednesday.

“There was something on Facebook to the tune of human trafficking and they were coaxing women in to the van,” Horn said.

Elkhart Police were called to check it out.

“We sent an officer up there and he spoke with the people,” Sgt. Chris Snyder said.

Known as the “Dirt Road Street Team,” the men go around the country promoting country rap artists and selling CDs in parking lots.

“The people that seemed to have the proper documents to sell the CDs they were trying to sell,” Snyder said.

Police didn’t find that they were breaking any laws, and certainly didn’t find evidence of human trafficking.

But they want everyone to be cautious about approaching strangers and buying things from them.

In fact, a quick Google search showed dozens of articles and pages criticizing the business practices of the Mikel Knight crew.

Some pages call it a scam.

“It just seemed awful weird they were flagging cars down talking to people,” Horn said.

Despite the public’s fear, their strange business tactics worked.

“They were obviously succeeding in what they were trying to accomplish to draw attention,” Snyder said.