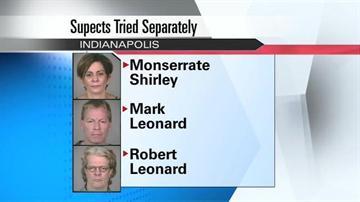 INDIANAPOLIS — A court ruled that the three people charged in a deadly November 2012 house explosion that killed two people and destroyed more than a dozen homes can move forward with separate trials.

The court ruled that Monserate Shirley, Mark Ray Leonard and his brother, Robert, will all be tried separately for their alleged roles in the explosion.

The trio is charged with two counts of murder and conspiracy to commit arson.