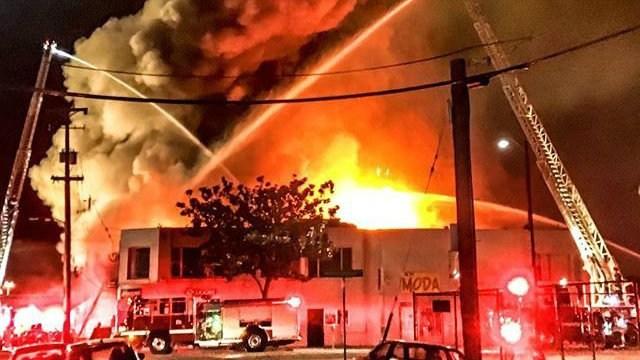 OAKLAND, California (CNN) -- As investigators sift through the debris of the charred Oakland warehouse that became a mass grave for at least 36 people, court documents obtained by CNN provide an unsettling glimpse of life in the facility before it caught fire Friday evening.

The documents are requests for restraining orders filed by and against Derick Ion Almena, the leaseholder of the cavernous structure known as the Ghost Ship.

They contain allegations of theft, assault and intimidation in which Almena is in one case the alleged aggressor and, in the other, a victim.

The accounts, while unproven, add to a chaotic portrait of the way the building was allegedly maintained and managed prior to the deadly blaze.

Attempts to reach Almena were unsuccessful. In a brief interview aired on NBC's "Today Show" Tuesday, he said he was "incredibly sorry" for what had happened at the warehouse.

At the time of the fire, the site was the subject of a pending investigation by Oakland's Building and Planning Department. Officials were looking into complaints that the property had piles of garbage and had been improperly remodeled for residential use. Officials also said the dance party going on at the facility when the fire broke out was held without a permit.

The blaze is now under criminal investigation. Officials have not determined its cause or origin, but conditions at the site prior to the fire -- and how it was being used -- could be factors in determining culpability.

One of the restraining order requests was filed by a man who said he rented space from Almena for a New Year's Eve event hosted at the warehouse two years ago.

Phillipe Lewis wrote that he was accosted by Almena when he returned to the warehouse to clean up on January 2, 2015.

He said Almena demanded additional money, stole his sound system, physically assaulted him and threatened to go get a gun.

Lewis' friend, Matthew Elvey, began to record the alleged assault on his iPhone, according to his own request for a restraining order against Almena.

Elvey said his phone was taken from him and that he was "beaten by Derick's staff at his direction."

"My shoulder was pulled from the socket. I was kicked in the forehead, shoulder and jaw," Elvey wrote.

Oakland police arrived at the scene in the aftermath of the disturbance. Elvey declined medical treatment and no one was arrested, according to a police report.

The request for a restraining order was dismissed, according to court records. Neither Lewis nor Almena appeared in court, records show. It's unclear whether Elvey failed to appear or if he did show up but asked that the matter be dismissed.

About a month after that incident, Almena filed a request for a restraining order against a woman who had once rented an art space in the warehouse but who had since begun "attempting to illegally squat" there, according to the documents filed.

He accused the woman of trying to provoke him by pushing him, slandering him, and making false accusations to child protective services about the way he cared for his kids.

Almena referred to the woman in court papers by two different last names. CNN is not identifying her, pending confirmation of her identity.

Almena said the woman threatened to have her sons "come over and blow my [expletive] head off." At one point, he alleged, he was chased by the woman and her son, who was armed with a gun. Another time, he alleged, the woman's son kicked out the window of a car Almena's wife and young son were in. The broken glass cut his son, he said.

The woman, Almena wrote, is "extorting me with fear tactics to avoid past due rental fees and legal eviction."

He sought a restraining order for himself, his wife and three children, then ages 11, 6 and 4.

"My family is in fear," Almena wrote.

The request for a restraining order was denied when neither party showed up in court, records show.