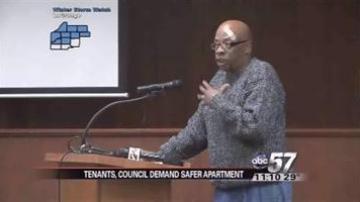 SOUTH BEND, Ind. -- The Courtyard Place apartments in South Bend has a reputation for being a dangerous place to call home.  Just last week someone shot a man outside the complex.  Things have gotten so out of control, the city is stepping in.  The South Bend Common Council held a meeting tonight to figure out how to fight the crime.

"Kevin Martin shot her, I believe, on more than one occasion, in the presence of her children, and she bled to death in the stairwell outside of her apartment," said Prosecutor Michael Dvorak.

This is the type of violence that law enforcement and residents said goes on at the Courtyard Place Apartments in South Bend.

According to the police chief, there have been well over 13,000 calls to the complex in the last four years.  So far this year, there have already been 117.

Now the South Bend Common Council and members of the community want answers from management.

"There is one piece to the missing puzzle and that is the owners," said the Vice President of the South Bend Neighborhood Association.

But they didn't show up.  Instead, an attorney representing the owner made a statement saying the complex did not know the crime level was so high, but the owner is taking preventative measures.

"There is, in fact, a St. Joseph County officer providing security there", said the Courtyard Apartments' attorney.

The Courtyard Apartments did hire a security at the complex, but the officer only works three hours a day.  Courtyard resident Joseph Dansly said that is not enough.

"As far as security goes, when most of the activity happens in my area, there is no security," said Dansly.

The Common Council plans on writing the owners a letter in the next two days to tell them they need to help curb the crime, fast.