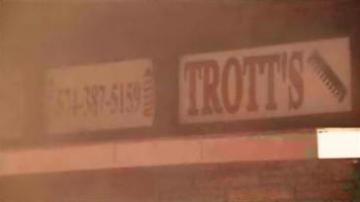 Thick smoke proved to be a challenge for firefighters. Due to the building being a brick structure, crews did have trouble putting out flames because it holds heat in.

Traffic was blocked off on West Washington Street while firefighters battled the blaze.

Firefighters believe the building was vacant.

One firefighter suffered an ankle injury while fighting the fire.