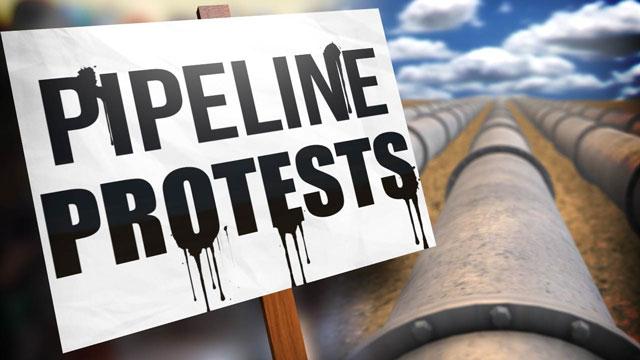 (CNN) -- Police in riot gear faced off with protesters on horseback as the monthslong protests over the Dakota Access Pipeline came to a head Thursday.

At least 117 protesters were arrested after law enforcement Humvees and helicopters began to flood the area to break up a protester encampment near the pipeline's path.

Calling themselves "water protectors," supporters of the Standing Rock Sioux Tribe set up tents and teepees on the land, about an hour south of Bismarck, which they said belongs to the tribe under a 19-century treaty.

But authorities said they are trespassing on pipeline property. Officials brought in reinforcements from seven states to remove protesters and dismantle roadblocks made of hay bales and wood.

As the standoff continued, police deployed bean bag rounds and pepper spray gas and unleashed a high-pitched siren to disperse the crowd.

At least two people were arrested for allegedly firing gunshots; one on Highway 1806 near officers and another near a bridge north of the protester's main camp.

"Most of these people are peaceful, prayerful people," Fong said. "But we know that there is a faction that is willing to do anything to stop this pipeline. That's why our people went down there prepared."

By Thursday evening, law enforcement had cleared the area and pushed protesters about a mile down Highway 1806, to the site of a previous encampment. Law enforcement lingered in vehicles from different agencies as trucks towed burned cars.

Both sides have accused the other of increasingly aggressive tactics, from police strip-searches and violence, to protesters destroying construction equipment.

The conflict has become a celebrity cause, drawing the support of actors Shailene Woodley, who was arrested in an October 10 protest, and Mark Ruffalo, who provided infrastructure for the camp, including solar panels.

Ruffalo told CNN's Jack Tapper that he did not witness violence when he visited there, but he heard stories from people who claimed they were thrown in jail naked.

Protesters are trained in peaceful resistance, he said. No one is allowed in the protest area without training.

"The mantra of the place is 'it's not the police, it's the pipeline that we're protesting or protecting ourselves against.' They spend basically the entire day doing prayers, chanting. I've never been around so peaceful a stand."

It's a $3.7 billion project that would cross four states and change the landscape of the US crude oil supply.

The 1,172-mile pipeline, currently under construction, would stretch from the oil-rich Bakken Formation -- a vast underground deposit where Montana and North Dakota meet Canada -- southeast into South Dakota, Iowa and Illinois. An estimated 7.4 billion barrels of undiscovered oil is believed to be in its US portion, according to the US Geological Survey.

After the pipeline is completed, it would shuttle 470,000 barrels of crude oil a day, developer Energy Access Partners said. That's enough to make 374.3 million gallons of gasoline per day. From Illinois, the oil could go to markets and refineries across the Midwest, East Coast and Gulf Coast.

Depending on who you ask, the results could be an economic boon that makes the country more self-sufficient or an environmental disaster that destroys sacred Native American sites.

Supporters say it would significantly decrease American reliance on foreign oil and free up railways to transport crops and other commodities.

The Standing Rock Sioux tribe and its supporters say pipeline construction will destroy burial sites, prayer sites and culturally significant artifacts. The tribe sued the US Army Corps of Engineers after it approved the project.

But an advocacy group says the tribe's claims are misleading, saying the pipeline "does not cross into the Standing Rock Sioux Tribe's reservation."

The Midwest Alliance for Infrastructure Now also said 100% of the affected landowners in North Dakota, where part of the tribe lives, voluntarily signed easements to allow for construction.

The developer says the pipeline would provide a safer, more environmentally friendly way of moving crude oil compared to other modes of transportation, such as rail or trucks. Pipeline supporters cite the 2013 disaster in Quebec, Canada, where a train carrying crude oil derailed and destroyed downtown Lac-Megnatic.

"The Dakota Access pipeline would fuel climate change, cause untold damage to the environment, and significantly disturb sacred lands and the way of life for Native Americans in the upper Midwest," a petition on CredoAction.com states.

Opponents also say they're worried what would happen if the pipeline, which would go under the Missouri River, ruptured and contaminated the water supply.

But the Midwest Alliance for Infrastructure Now backed the developer's claim that pipelines are a safe way of moving crude oil.

"Already, 8 pipelines cross the Missouri River carrying hundreds of thousands of barrels of energy products every day," the group said in a statement.

Energy Transfer Partners estimates the pipeline would bring an estimated $156 million in sales and income taxes to state and local governments. It'll also add 8,000 to 12,000 construction jobs, the developer said. The company said it has tried to steer the pipeline away from residential areas and reach voluntary deals with property owners "at a fair price."

But Archambault said he thinks the Native Americans are getting short-changed once again.

"What we're opposed to is paying for all the benefits that this country receives."

CNN's Madison Park and Alberto Moya contributed to this report.