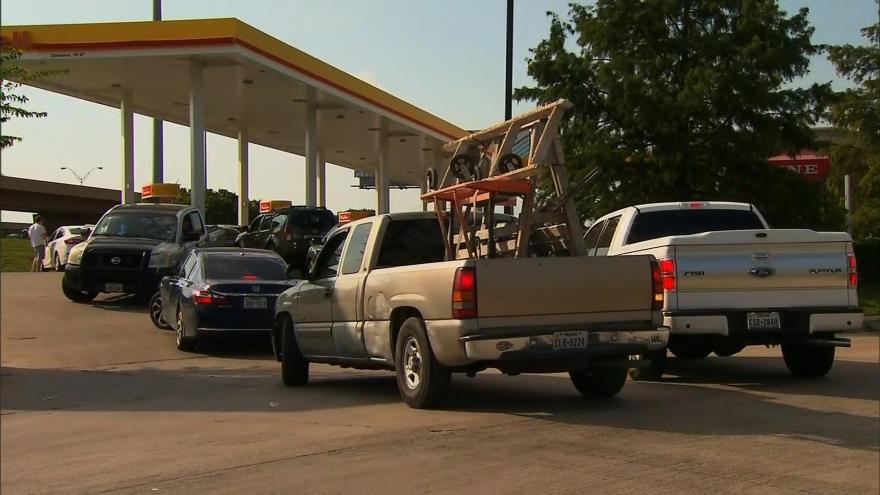 (CNN Money) -- The frantic social media posts came rolling in on Wednesday and Thursday: Dallas, Texas was running out of gas.

Twitter users posted snapshots of long lines of cars outside gas stations and signs went up warning drivers that their local gas pumps had been bled dry. Many put the blame on Hurricane Harvey -- which shut down nearly a quarter of U.S. refining capacity when it struck the Gulf Coast, about 250 miles southeast of Dallas.

But petroleum analysts say some of Dallas' woes were self inflicted.

When Dallas residents heard Harvey had disrupted gas production, they came out in droves to refill their tanks. The sudden, dramatic spike in demand started draining the pumps before they could be replenished, according to Patrick DeHaan, an analyst at GasBuddy.

The sprawling Texas city does typically receive the majority of its gas supplies from Houston. But this week, help was on the way. Some gas has been diverted from other cities -- like Tulsa, Oklahoma -- to help keep Dallas stocked, DeHaan said.

Had the people of Dallas worked to conserve gas and only purchase more when they needed it, DeHaan said he thinks the city would have been able to "scrape by" until Houston's refineries were up and running again in coming days or weeks.

"If everyone conserved, it could really stop the problem in its tracks," he said. But now "it's too late for Dallas. They may run into some really big issues."

Those issues may include skyrocketing gas prices and continued shortages, DeHaan said.

And Dallas is somewhat lucky. Had a similar panic broken out in a city like Atlanta, which does not have refineries or alternative gas pipelines nearby, the city could have been left stranded without fuel, DeHaan added.

Harvey has put a major dent in U.S. gas supplies.

While the U.S. has a huge oil stockpile, there are virtually no gasoline reserves to immediately make up for the deficit.

For that reason, Americans can expect to pay more at the pump. S&P Global Platts said that gas prices "continued to rise Thursday as downed refineries tightened supplies not only in the U.S. Gulf Coast, but on the Atlantic Coast as well."

And Texas Attorney General Ken Paxton warned Dallas drivers that some gas stations were trying to cash in on the city's panic by over-inflating gas prices.

"The Consumer Protection Division of the attorney general's office received more than 500 complaints today, many of which involve allegations of high fuel prices in Dallas, including amounts ranging from $6-$8 dollars per gallon," Paxton's office said in a statement.

There's likely to be several more days of widespread gas price hikes ahead as Houston suppliers work to get back on their feet.

But in order to avoid a gas crisis like the one Dallas has found itself in, DeHaan said it's important not to rush to the pump. He also advised it might not be a good idea to plan a road trip this Labor Day weekend.

"I think we're at the point now where I would look at changing [those] plans. It's going to become a huge process for folks in [some] areas to fill up their tanks," he said. "I wouldn't fill up. I would only buy what I'm going to need for the next 24 hours."

Related: European flotilla is bringing gas to the U.S.

"Prices are moving higher," he said. "They're going to be 20 to 30 cents higher -- but I would probably wait it out rather than wait in line...things are going to return to normal."

Smith added that the gas issues will likely blow over "in the next week or so."