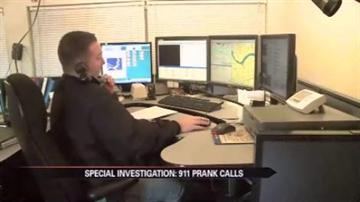 ELKHART, Ind. -- Prank phone calls -  we’ve all made them as kids and they can be pretty funny, but they can actually be pretty dangerous.

Elkhart’s Communication Center said the thousands of prank phone calls they get per year, not only waste officers’ time but they also tie up lines for people that actually need help.

“We have had so many. People reporting fake accident with bodies lying all over the place,” said Desiree Detwiler.

“They said there was a shooting inside the residence and there were people dead,” said Detwiler.

But prank calls are no joke to the dispatch center or Elkhart city officers.

They investigate every claim that comes in, meaning not only are prank phone calls not a laughing matter.  They also have the potential to increase response times to people who really need help.

Fortunately, due to technology prank phone calls have gone down significantly in the past seven years.

“The decrease in pay phones and the increase in cell phone technology, phones are now traceable,” said Detwiler.

In 2011 there were only one thousand calls, but with the amount of real emergency calls,  the communication center gets every year, every minute counts.