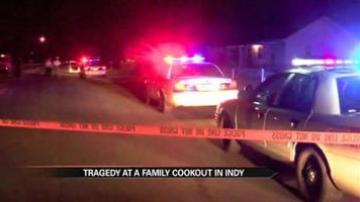 INDIANAPOLIS, Ind. -- A man was killed and two people were sent to the hospital following a gun battle, which stemmed from a dispute at a family cookout.

It happened on the city's southwest side.

A three people were fatally shot in this dispute.

Police say it all started over a family fight.

They believe there are multiple shooters involved and that alcohol was a factor.
Share this article: