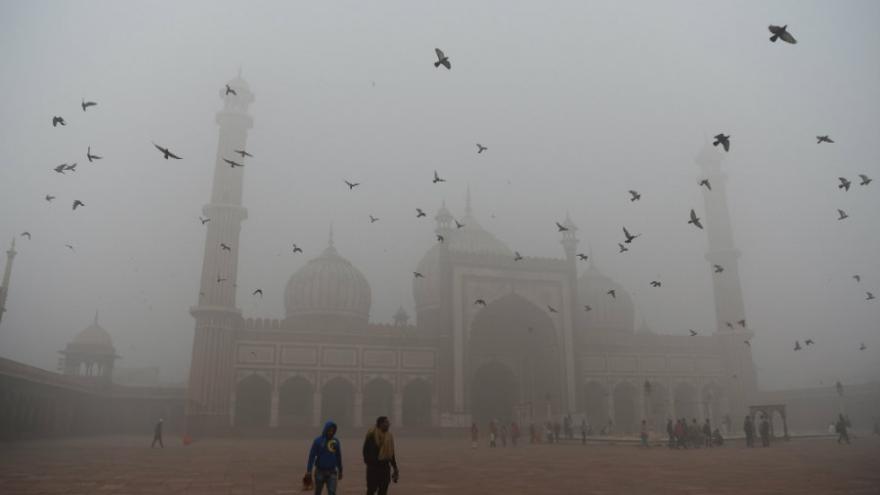 (CNN) -- The Delhi government is scrambling to introduce a series of city-wide emergency measures, as the capital braces for yet another day of heavy pollution.

The severity of the pollution has led city chiefs to implement a total ban on trucks entering the capital, as well as temporarily suspend all civil construction projects. On Wednesday, they took the highly unusual step of closing all schools.

Air quality readings in India's capital have soared since Tuesday, with one monitor showing levels in the city were 969 -- the World Health Organization considers anything above 25 to be unsafe.

Those levels are based on the concentration of fine particulate matter, or PM 2.5, per cubic meter. The microscopic particles, which are smaller than 2.5 micrometers in diameter, are considered particularly harmful because they are small enough to lodge deep into the lungs and pass into other organs, causing serious health risks.

The smog has blanketed much of the city in recent days, severely reducing visibility, restricting traffic, delaying flights and restricting all but the most necessary outdoor activity.

Officials have been criticized over their slow response to the crisis, with TV stations giving prime time coverage to the worsening conditions. On the street, residents tied scarfs across their faces as makeshift masks, while stores selling air purifiers recorded a surge in sales.

Mahesh Sharma, a government minister in the Ministry of Environment, Forest and Climate Change, has blamed the unusually high pollution levels on a lack of wind and change in humidity levels.

Pollution is nothing new to the 18 plus million residents living in the Indian capital. Every winter, pollution levels in Delhi and its neighboring cities rise to hazardous levels.

Delhi was named the most polluted city in the world in 2014 according to the WHO. Since then, other Indian cities have climbed up the list, knocking Delhi's ranking down to 14.

"Delhi has become a gas chamber. Every year this happens during this part of year," Arvind Kejriwal, Delhi's chief minister, tweeted. "We have to find a solution to crop burning in adjoining states."

Politicians and officials blame farmers in neighboring northern Indian states who clear their fields by burning their crops. The landlocked capital sits in a natural bowl and is surrounded by industrial and agricultural hubs. Without the coastal breeze of cities such as Mumbai and Chennai, much of the pollution settles.

Every year, farmers across fertile neighboring states set fire to their fields to clear them for the next season. Known as stubble burning, millions of tons of crop residue are set alight releasing untold amounts of particulate matter into the environment.

In addition to the crop burning, Delhi's pollution comes from industrial emissions, vehicle exhaust from cars, road dust and burning of biomass, said Santosh Harish, assistant director of research at EPIC India, a research institute based in the US and India.

A report by the Indian Institute of Technology Kanpur carried out in 2014 found that vehicle omissions accounted for 20% of Delhi's annual PM2.5 levels.Nevertheless, the number of cars on the city's roads has continued to rise. According to government statistics, the total number of vehicles in Delhi exceeded 10 million for the first time in 2016.

In the wider Delhi-National Capital Region (NCR) -- a sprawling area that encompasses Delhi, as well as satellite districts in the neighboring states of Haryana, Uttar Pradesh and Rajasthan, and is home to some 46 million people -- a lack of effective public transportation has meant that workers are forced to drive to and from jobs in the city, further exacerbating the problem.

In a bid to improve air quality, local governments have implemented various measures, including the shut down of power plants and brick kilns in the wider Delhi region, as well as the banning of private electricity generators during the winter months, said Anumita Roychowdhury, executive director at the Center for Science and Environment.

The country's Supreme Court also banned the sale of firecrackers during Diwali -- the Indian festival of lights.

Still, there is much more work to be done to enact systematic change and not only emergency measures, said Roychowdhury. One of the missing pieces is sustained public pressure.

"What we're unable to do as a community-at-large, and that also holds true for the government, is we've been unable to sustain interest beyond the three months of winter," said Harish.

Unlike in other notoriously smoggy cities such as Beijing, air pollution has yet to become a politically sensitive issue in Delhi. Instead residents are increasingly looking to privatized solutions, claims Govindraj Ethiraj, the founder of data journalism site IndiaSpend.

"For instance, most people don't trust the quality of water that's supplied to their homes, so the solution that they found is the water purifiers," he said. "So now what people have done is buy air purifiers."

While air purifier and pollution mask sales have grown steadily, Ethiraj points out it excludes the millions unable to afford the various high-tech solutions.

On the street Wednesday, Delhi resident Mukesh Kumar Srivastav, whose job as a security guard requires that he stands outside for much of the day, said that air filtration was a distant dream. "Our position is low, so if the government is not doing anything, what can we do in response? There's nothing we can do."