Despite controversies Dyngus Day as festive as ever 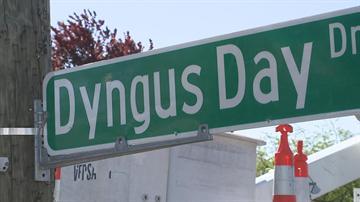 SOUTH BEND, Ind. – Polish sausage mixing with politics can mean only one thing, another Dyngus Day in South Bend.

The holiday not only celebrates the city’s polish heritage, but also marks the unofficial start of election season in the area.  For politicians and other city leaders it’s a day to celebrate, but recent controversies in the city had some wondering what the mood of the parties would be like.

In the past few weeks, South Bend Mayor Pete Buttigieg removed Former Police Chief Darryl Boykins from office as a result of a federal investigation into recorded phone calls.  Then, charges were filed against democrat party members, including former St. Joseph County Democrat Chairman Owen “Butch” Morgan, accused of forging petitions to put candidates on the ballot during the 2008 Presidential Campaign.

Mayor Buttigieg, who marked 100-days in office on Dyngus Day, still couldn’t comment on the removal of Boykins, but said the recent issues weren’t ruining the holiday for him.

"There's always going to be tough issues and I think what a day like today is about is how do we come together and move forward,” Buttigieg explained.  “So, in a way, maybe it's a good thing we had a holiday so soon after those tough issues so we can say alright where's our community headed and where's our party headed."

At the traditional democrat gathering at the West Side Democratic Club, the mood was as festive as ever.  Democrat Congressman Joe Donnelly, now campaigning for a seat in the senate, agreed that the ballot forging case didn’t hurt the festivities.

"I don't think so, that's a serious issue and I have great faith in our judicial system and they're going to deal with that," explained Donnelly.  “Voters of the area and the state expect elections to be run in the right way and we’re going to make sure that that continues.”

Dyngus Day is usually associated with local democrats, but this year republicans held their own celebrations.  Candidates toured the area in a bus, stopping at traditional Dyngus Day celebrations.  Republican candidate for governor Congressman Mike Pence, attending his first Dyngus Day, said his focus on the holiday wasn’t to attack his opponents.

"Bringing our campaign up here to South Bend on Dyngus Day, I hope, is a statement about our commitment to all 92 counties of Indiana," Pence said while enjoying pierogi at the Z.B. Polish Falcons Club.  “I think it’s a time when people are ready to set politics aside and work for an even better Indiana.”

Republican Jackie Walorski, who is running for Indiana’s second district seat in the House of Representatives, said Dyngus Day wasn’t the time to bring up the controversies.

"It's a day when political titles really don't matter and that's kind of what we're sensing,” Walorski described.  “You can be a republican, a democrat or an independent and this is still your country."

Politician on both sides agreed, it was time to focus on celebrating the start of election season and not the issues that will likely dominate it.