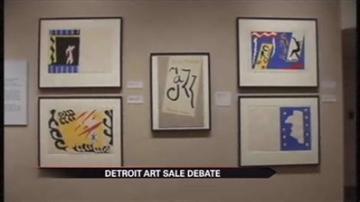 DETROIT -- Michigan's attorney general is trying to determine whether lawmakers can legally sell art to pay off Detroit's debt.

The Detroit city manager says the city's art could help pay its debts but a new senate bill would block any sale.

The art work is owned by the city and therefore could be part of any liquidation to pay off city creditors.

Governor Rick Snyder did not embrace the bill but says he will review it.

"My goal is not to see the art of the DIA disappear," said Governor Snyder.

Attorney General Bill Schuette said they are going to review the policy and talk more about it.

"We're going to review this thoroughly and carefully and then probably have another discussion," said Schuette.

The suggestion to sell the art has gotten mixed reviews.

Its fate is now in the hands of the state senate and maybe eventually the courts.