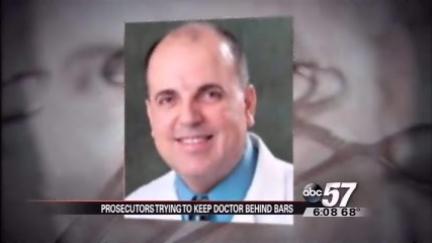 Dr. Fata was sentenced to 45 years in prison.

He pleaded guilty in September 2014 to 13 counts of health care fraud, one count of conspiracy to pay or receive kickbacks and two counts of money laundering.

Fata was ordered to forfeit $17.6 million.

“Rather than use his medical degree to save lives, Dr. Fata instead destroyed them in pursuit of profit,” said Assistant Attorney General Caldwell.  “Time and again, Dr. Fata callously violated his patients' trust as he used false cancer diagnoses and unwarranted and dangerous treatments as tools to steal millions of dollars from Medicare, even stooping to profit from the last days of some patients' lives.  While no sentence can restore what was taken from his patients and their families, the sentence imposed ensures that never again will Dr. Fata lay hands on another patient.”

“Health care fraud has been a serious problem in Michigan, but no case has been as egregious as the conduct of Dr. Farid Fata,” said U.S. Attorney Barbara L. McQuade.  “Dr. Fata did not care for patients; he exploited them as commodities.  He over-treated, under-treated and outright lied to patients about whether they had cancer so that he could maximize his own profits.”

Fata further admitted to using the proceeds of the health care fraud at his medical practice, MHO, to promote the carrying on of additional health care fraud at United Diagnostics, where he administered unnecessary and expensive positron emission tomography (PET) scans for which he billed a private insurer.