Devin Gardner in the spotlight in Saturday's game 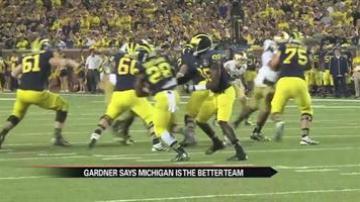 ANN ARBOR, Mich. --- Irish quarterback Tommy Rees wasn't the only one feeling the heat this week.

Michigan quarterback Devin Gardner was also put in the national spotlight for this weekend's game.

After speculation this week about who would come out as the better team, Gardner said it was Michigan all along.

"We worked so hard since I got here, and you guys are just now seeing it but behind the doors we've been working so hard and it's finally, we're finally getting the chance to display it in front of the largest crowd in college football," said Gardner.

He says Michigan didn't have a chance to prove the team's ability until Saturday night.