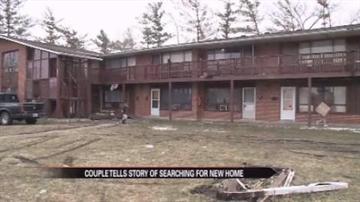 MISHAWAKA, Ind. -- Already faced with health challenges, a Mishawaka couple lost their home when the city shut down an apartment complex. Now they're stuck in a motel 6 and even the hotel is trying to help them find a home.

The couple says they've spent any money that had saved on a hotel room.

They say the region just doesn't have the kind of affordable handicap accessible options they need.

The halls of Motel 6 are a far cry from home.

"We got to try to get out as soon as we can because I'm supposed to be in a hospital bed too and it don't work well when you don't have that either,” said Eric Osborn.

both Eric Osborn and Jennifer Hupp are disabled and use electric scooters to get around.

When the city shut down Princess Apartments, they and their things were kicked to the curb.

"In our friend's shed. Everything. Hospital bed. you name it,” said Hupp.

They were saving up to escape the unsettling conditions at the Princess Apartments.

Even the Motel 6 workers posted an ad for them on craigslist.

But the affordable places don't have ramps or wide enough hallways.

"Over 90 percent of the places that we've called either don't want to put access in or won't let us have someone build it for us,” said Hupp.

It's a mobile home community with a two bedroom with a ramp.

They were originally told it was donated for them--only to find out they'd been told incorrectly.

But they're still keeping hope.

"We need $3,700 to get into it and with this, staying here is just dwindling down what we had,” said Osborn.

The woman over at Village Green said she's not sure why someone told the displaced residents the wrong information, that homes had been donated for them to move into.