Donnelly and Mourdock in dead heat 6 weeks from election 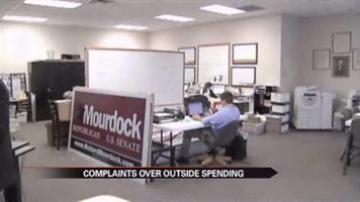 INDIANA -- The race for Indiana's open Senate seat is heating up. The latest poll numbers show Joe Donnelly and Richard Mourdock in a dead heat.

And money from political committees, known as superpacs, is pouring into the state.

But now Mourdock's campaign is complaining about outside advertising, even though he benefitted from Super PAC spending in the primary and has more groups supporting him.

Super PACs spent nearly $3 million on the Indiana State Primary in May.

Political strategists believe with President Obama gaining ground over Mitt Romney, the focus will shift to Congress and the Hoosier State.

"This race may determine who runs the U.S.," Brose McVey, Mourdock's deputy campaign manager said. "Hoosiers will have a chance to really impact the fugure of this country."

Donnelly and Mourdock are set to have their first debate Oct. 15 in Indianapolis.