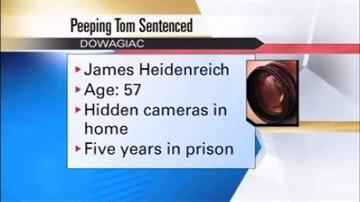 DOWAGIAC, Mich. -- A Dowagiac man has been sentenced to five years in prison for recording young girls undressing in his home with a hidden camera.

Michiana News Channel reports that prosecutors say 57-year-old James Heidenreich placed a camera in a bedroom and a bathroom which captured the images.

It was a former girlfriend who found a video and called police.

Heidenreich insisted he installed the cameras to catch evidence of illegal drug use.