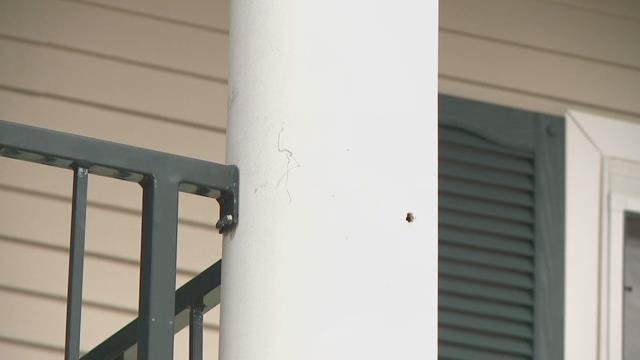 Shots were fired into a family’s living room overnight in Dowagiac, and though nobody was injured, the community there is on edge as police search for the suspects.

“We heard about four to five gunshots right out in this area, right in the road,” Brandon Watson said. “Not in the woods or anything; they were close.”

Watson was visiting his grandma and had his headphones on Sunday night when shots rang out in her apartment complex.

“She looks at me, I take [the headphones] out and she said, ‘I heard a gunshot,’” Watson said. “So I stood up and looked out the window and I heard four more gunshots and I saw a black SUV take off.”

“The individual got out, approached the apartment complex and then fired shots into the living room of the residence,” Dowagiac Police Chief Steven Grinnewald said.

Five adults and a 12-year-old child were inside the apartment at the time, but nobody was injured.

A sliding glass door was shot out and bullet holes could be seen on the balcony.

“It does appear that it was the wrong apartment that they shot into,” Grinnewald said.

The family was too afraid to speak on camera, but off camera, they said there was an altercation outside their home before the shooting and someone knocked on their door looking for a person they didn’t know.

Neighbors describe the apartment complex as quiet and family-friendly.

“My daughter was here yesterday playing in the park by herself,” Watson said.

“I wouldn’t call it what we would consider at least, from our end, to be a bad area type of thing,” he said.

Though the motive of the shooting is not yet known, Grinnewald said neighbors should not feel overly concerned.

“Was this a random incident where somebody picked an apartment and just decided to fire into it? No, we don’t believe so,” Grinnewald said. “So I don’t think there’s that concern to be worried about.”

Dowagiac Police believe the shooter is a tall, thin black male with dreads or corn rows who was wearing a black hooded sweatshirt and black pants. They believe he drove away with another black male in a maroon, medium-sized SUV.

If you have any information about this shooting, you are asked to contact Dowagiac Police.