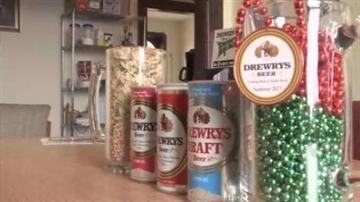 SOUTH BEND, Ind. -- If you grew up in South Bend, you may remember the Drewrys Brewery on the city’s west side. A local company has purchased the rights to Drewrys and is working to bring the beer back.

The new owners say it’s going to be even better than it was before.
The company just signed with an Indiana distributor.

They say by this summer the brew will be sold in bars and restaurants in town.

That's not the only project they're undertaking.

Since announcing the comeback on Facebook, they've received all kinds of photos from people documenting the company's history in South Bend. So they're also putting together a book.

“A lot of people seem to be very excited about it especially since we're asking everybody to share their own personal memories. We've heard some phenomenal stories, everybody has a Drewrys story around here and we'd love to hear them,” said Dan Blacharski, Spokesman for Drewrys Brewery Company.

Their plan is to put the book together and sell it this summer when the brew with a new twist makes its debut.