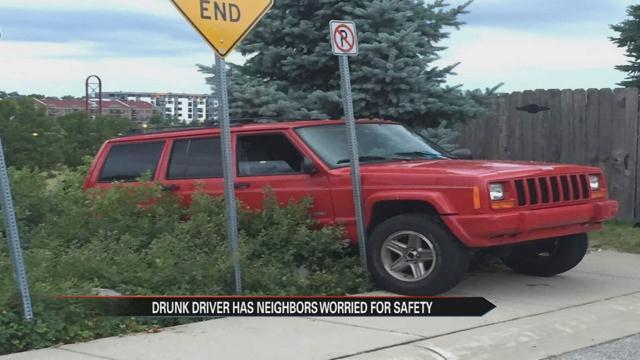 For the next two weeks, police will be cracking down on drunk drivers as part of the annual Drive Sober or Get Pulled Over campaign.

Last year, there were almost 5,000 alcohol-related accidents in Indiana, according to the Indiana Criminal Justice Institute, and that’s a marked decrease from the previous year.

There was even an alcohol-related accident in Mishawaka Friday night that left a fence destroyed and neighbors concerned.

“Our neighbor here came home. He was very drunk, and he tried to back in and park here, and apparently had pretty poor judgment. As you can see here behind me, he drove through the bushes, broke down the fences on the city’s wall and almost drove off the steep drop off here onto Front St,” said Jesse Davis, who lives two houses down from the man.

Jesse’s neighbor was driving this car last night--allegedly drunk according to Jesse and the man’s wife—when he tried to park in a no parking zone.

“He got stuck on this big boulder that you see here, and he was out here literally full throttle, forward and reverse trying to get unstuck. Fortunately, he couldn’t, because he would’ve went over the wall,” said Jesse.

He might have become one of the fatalities the ‘Drive Sober or Get Pulled Over’ campaign is trying to prevent.

Last year, there were 4,828 alcohol-related accidents in Indiana. That’s down 26.5% from 2014. 92 of those accidents resulted in fatalities, which is a 9-percent decrease.

Potential fatalities are exactly what neighbors are concerned about.

“It’s pretty scary, because there are quite a few kids who live on this road…and any of them could have been out at the time, and he could’ve injured them or even worse,” said Jason Evans, who lives up the street from the man who crashed his jeep.

His own kids are even scared.

“I don’t feel safe now, like safe at all, walking across the street,” said his son, Jason.

The St. Joseph County Traffic Safety Partnership is working to stop incidents like this one.

Sometimes, it takes an extra crackdown to save lives, because even after last night’s accident, the man went to the bar again today.

“As we speak, he is out sitting in a bar drinking, and he’s driving his other truck, and he will come back home tonight drunk and park his vehicle here,” said Jesse.

The Traffic Safety Partnership has been running its campaign for more than 20 years now. This year, the campaign runs from August 12th to September 5th.