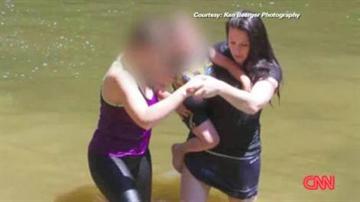 A young couple was taking engagement photos on the banks of a river near Philadelphia when a five-year-old playing in the river got in over his head. The bride sprung into action.

“His head went back.  He was bobbing up and down, and I knew that he was going under,” said Becki Salmon.

“Matt said, 'Hey we got to get him!' and I turn to my right and Becki, she was out of sandals, she's doing the dive right into the water,” said Beerger.

“It was almost over my head where we were I had to swim to him.  I grabbed him. I pulled him up into me, pushed him over my shoulder and immediately started smacking so he started throwing up water,” said Salmon.

Because of recent rains, the waters of the Wissahickon were very murky.

The bride-to-be says she knew she had to act fast or that little boy would probably never be seen alive again.

“She's has been very humble through this process, and she hasn't wanted to take the credit she deserves. But she definitely deserves the recognition,” said Matt Werner, Salmon’s fiance.

Salmon is a trained lifeguard and paramedic. Her fiance is an EMT, and the photographer is also a paramedic.