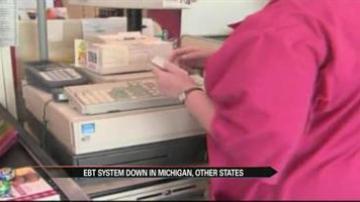 CASSOPOLIS, Mich. -- Families in at least seventeen states who rely on EBT and WIC for food, were unable to fill their refrigerators on Saturday.

Michigan was one of the first states to be affected.

The state says the issue did not have anything to do with the government shutdown.

The problem reportedly came from a glitch in the system that caused the cards to not work.

It was not until after 10 p.m. that the system was repaired and the cards were reactivated.

ABC 57 talked with a mother in Cassopolis who was directly affected by the EBT system failure.

"I mean how do you expect me to explain to my kids that they have to eat ramen noodles tonight because I can't afford to feed them?"

The mother of a four year old and a newborn baby says the incident was a nightmare.

Saturday morning, she filled up her grocery cart at the store, only to have her EBT card declined at the register.

She says she left the store without anything, hopped in her car and drove down the road to a mini mart, where her card was again, declined.

"I called Indiana stores which told us that we would not be able to use them there either."

She says that is when it hit her, putting food on the table and formula in her baby’s bottle was proving to be impossible.

The USDA released this statement:

“The vendor is working to fix this issue and EBT cards will work again once it is resolved. This issue is not related to the government shutdown."

But many mothers were afraid, not knowing how long they would have to wait to feed their kids.

"We’re adults, we can manage on our own, but what are our kids supposed to do? We’re going to have to suck up our pride and go to our shelters and ask for help."

Parents were prepared to do whatever they had to do to put food on the table, but late Saturday, the system was repaired, and the cards were able to be used.