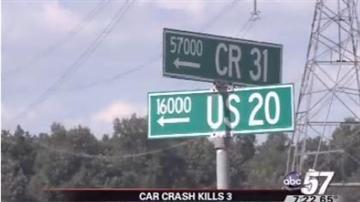 MIDDLEBURY, Ind -- Investigators were back on the scene Saturday afternoon piecing together a terrible crash that killed three people and injured two others.

A semi truck heading east-bound went over the center line causing a west-bound car to hit it and spin out of control. A third vehicle east-bound behind the semi truck then hit the west-bound vehicle.

46-year-old Pamela Beemer and 87-year-old Maxine Sailor were both killed in the crash. And 87-year-old woman who was not identified also died. All victims are from Elkhart. Both injured are expected to be okay.

At this point no citations have been issued.