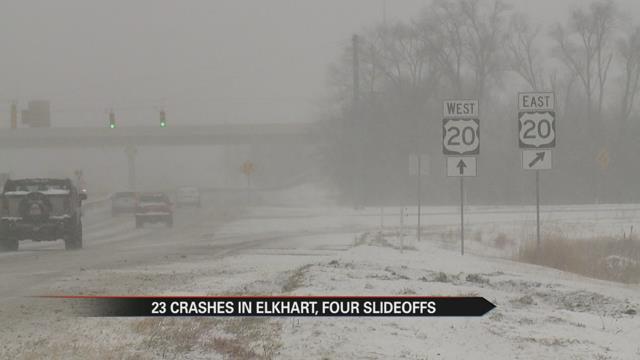 “December was no snow and now this is kind of like a shock for everybody,” says Michael Fredrickson of Goshen.

Residents and INDOT officials agree this winter is nothing in comparison to years past.

A representative from INDOT says 15,000 tons of salt have been used this winter compare to 32,000 tons the same time last year.

“This is a shock of reality basically,” says Fredrickson.

The reality of a typical Michiana winter hit Monday night. The snow continued into Tuesday.

Tuesday, Fredrickson traveled east on U.S. 20. He started his travels around noon and says the journey started off fairly clear.

But as the day progressed and he traveled further east, the snow picked up and the visibility dropped.

“When I got on the Bypass here on CR 17 then it started getting slippery a little bit a little bit of snow on the ground,” says Fredrickson.

INDOT officials say they will have four to eight trucks on the Bypass Tuesday night into Wednesday morning. Trucks will be continuously plowing to keep the roads as dry as possible.

Tuesday morning, further west on the Bypass at County Road 35, the Sheriff’s Department dealt with an accident caused by slick roads.

"The road is a sheet of ice be careful driving," says an Elkhart County Deputy.

Despite these rough conditions Fredrickson says as long as you are careful you don't have to stay inside.

“Over all the roads are driveable as long as everybody keeps their speed down and watch the guy in front of them,” says Fredrickson.