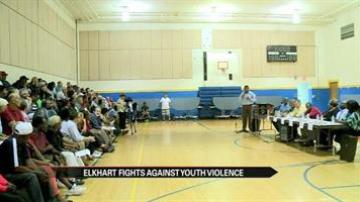 ELKHART, Ind. -- Emotions were running high at a youth violence meeting in Elkhart Tuesday evening. Community members are stepping in to get the kids off the streets.

Concerned parents, teachers, and police packed into an Elkhart gym to voice their concerns, hoping they can save kids at a younger age before it's too late.

The panel focused on three main topics: the synthetic drug bust in the city, the relationship between the public and law enforcement officials, and education.  They looked at how these three things were affecting the youth in the community.

One mother said the meeting was especially important to her.

Only two days before Christmas last year, 18-year-old Devonte Patrick was shot and killed in a church parking lot in Elkhart.

"I don't want to see another child die for no reason," said Tanner.

City officials led the discussion, hoping some ideas could eventually be put into action.

"We don't want these kids to become a Martin's shooter, or a likely attacker that would attack a police officer like the other day.  We have to help them understand that they have a future," said  Division Chief Rodney Dale of the Elkhart City Fire Department.

Dale's comments bring back another shooting still fresh on everybody's minds across Elkhart.

In January, police responded to an active shooting situation at a Martin's in Elkhart.  Two women were shot to death by Shawn Bair, a 22-year-old man who police say entered the store with the intent to harm others and himself.

Those attending Tuesday's meeting want to target these troubled kids early, before police have another situation like the one in January on their hands.

The panel will take some ideas from Tuesday's meeting and work to see which ones can be implemented in the community.