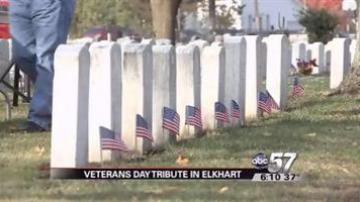 Dozens of trumpets lined the streets today. Each played "Taps" one at a time finishing at Rice Cemetery.

Players ranged in age from young teens to veterans over 80-years-old. Organizers of the event say playing "Taps" is one of the best ways to honor veterans.

"Taps is probably the 24 most important notes that can be played for a serviceman not only at a live performance but at a funeral it's a final farewell for what they have done for us," said Elkhart Eco Taps Chairman Terry Vantine.

The ceremony also included a wreath laying and other performances honoring every branch of the military.