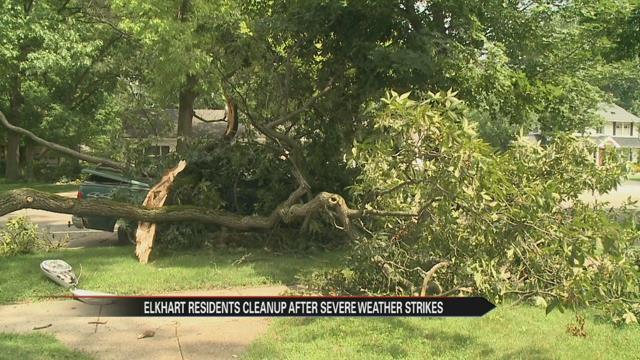 Thousands of homes are without power after thunderstorm swept across Michiana.

Many places in Elkhart were slammed by high speed winds and now residents are struggling to pick up the pieces before another storm hits.

Residents have a few words to describe Saturday’s storm.

“Trees down, power lines down, and no power,” said Williams.

Williams was amazed at how powerful this storm was, but is now left with pictures of his broken neighborhood.

Just a five minute drive down the road, Stewart Allen’s truck was crushed.

“I freaked out, that’s my way back and forth to work, now I won’t be able to go to work tomorrow I got to find a way back to work or get a ride,” said Allen.

Allen says it was only a matter of time.

“There's animals living in the tree," he said. "There’s holes in the tree. I warned them, I said something's gonna happen. And they had never taken care of it.”

Curtis says power outages are just another frustrating hit from mother nature but communication from power companies could help.

“I don’t know how you’re going to find out what’s going on with your power if you can’t log in if that’s the way they want you to do it,” said Curtis.

Help these neighbors could desperately use.

“We’re going to pay for it on the backside,” said resident Richard Zollinger.

Over 4,000 homes in Elkhart as of 7:30 PM Sunday were still without power according to Indiana Michigan Power.

The company estimates electricity would be restored by noon on Monday.