ST. JOSEPH COUNTY, Ind. -- Elkhart County has revoked the bond of Leonard Grosswiler following his arrest on OWI charges in St. Joseph County. Grosswiler is scheduled to be sentenced in December for a crash in August 2017 that killed 3 and injured 2 others.

Grosswiler was formally charged with operating a vehicle while intoxicated endangering a person, a class A misdemeanor on Wednesday.

Around 8 p.m. Tuesday night, a St. Joseph County Police officer was dispatched to Lincolnway East and Ash Road regarding a crash.

When the officer arrived, he located a pickup truck facing south in the northbound lanes of Ash Road. It had struck an SUV that had been northbound on Ash Road, reports said.

The driver of the SUV complained of pain, but refused treatment. She told police the pickup truck crossed the center line and struck her SUV head on, according to the probable cause affidavit.

The collision caused the SUV to be pushed into a vehicle that was in the northbound lanes behind it.

The officer found Grosswiler next to the crashed vehicles. His eyes were glazed and bloodshot, reports said.

He allegedly admitted to doing shots at a friend's house, according to police.

Police said Grosswiler failed 2 of the 3 field sobriety tests and had a BAC of .088, according to the probable cause affidavit.

Penelope Grosswiler, Leonard's wife, who is also charged in connection to the hit and run, was inside the courtroom as well.

ABC57 News asked her if she'd like to say anything about this recent incident, but she did not want to comment 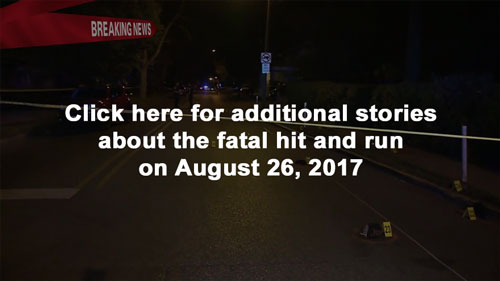 Elkhart County issued a warrant for Grosswiler's arrest and revoked his bond on Wednesday, according to court records.

ABC57 News spoke with Bill Smith, the father and grandfather of the Elkhart victims.

He said this is bringing back very painful memories.

"It just sent chills. Just knowing someone else could have been hurt," Smith says. "It was just a flash back to last year."

He, and the rest of the family, are hoping that this recent charge will finally put an end to their painful journey.

"With him being out there, it's still going to be in the back of our minds. It's been twice now," he explains. "Does he need to do it a third time? Are they going to give him a chance for a third time?"