Elkhart Veteran is going to the World Series 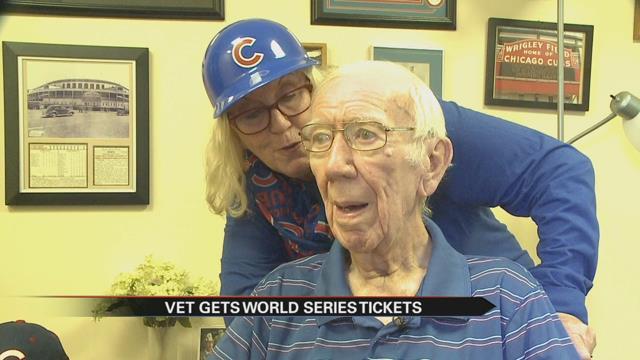 His first Cubs game was 81 years ago when he was just 12 years old, his next is this Saturday night and he’ll be a spry 93.

His name is Robert Havlish and he’s a World War II veteran.

This weekend, the Elkhart native is going to his first ever World Series game.

It’s a dream come true and it’s all because of his daughter and son-in-law.

When the season started, they told him they’d taking him to Wrigley Field if the Cubs played in the World Series and they’re keeping that promise!

Havlish has been to 55 straight Opening Days, and he even went to Wrigley Field’s first game under the lights but his daughter says this game on Saturday is the biggest one yet.

“I think the tears say it all I’m so blessed I can still take him and that we can still enjoy a Cubs game together and you know I don’t even care, well Saturday I don’t care if they win gotta win Friday and Sunday but as long as I’m with him that’s all that really matters,” said Kathyrn Havlish Loudin, Robert’s daughter.