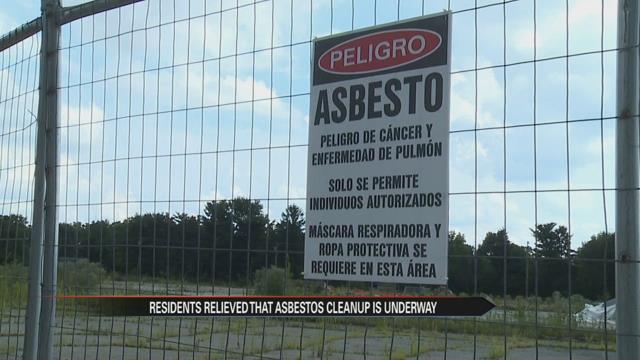 Crews will begin cleanup at the former Johnson Controls site on Monday six months after asbestos was found on site.

Residents say they have been fed up with the issues at 1302 E. Monroe St. for years.

When Johnson Controls shut down in the 90’s, the property was purchases by Tocon Holdings LLC.

“They tore it down quick. Everything sat. The rubbish sat, the trash sat,” said resident Paula White.

Those piles of rubbish and trash tested positive for asbestos in March.

She and her neighbors are now a part of a lawsuit against Tocon Holdings LLC.

“People that had the power to clean it up just let it sit,” said White.

Because Tocon Holdings is unable to foot the bill, the EPA has been in town since March.

EPA Federal On Scene Coordinator Andy Maguire says he has budgeted over a million dollars for the cleanup. He has been working for months to acquire those funds from the federal government.

On Monday, those asbestos-filled piles will be loaded on trucks and taken out of Goshen.

The EPA says the process should be finished within the 3 months.

“I know for some people this process has taken awhile but for what it is it’s actually going really quickly and I’m really glad to know that it’s going to be cleaned up by the end of the year here,” said Mayor Jeremy Stutsman.

In the meantime, the site has been secured by the EPA and residents are not at risk for further asbestos exposure.