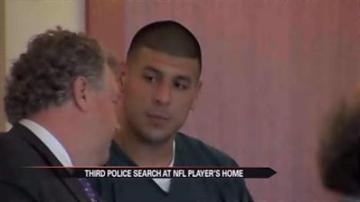 NORTH ATTLEBOROUGH, Mass. — The evidence is growing against a former NFL player charged with murder.

Police visited the home of Aaron Hernandez for a third time Thursday night, this time in search of evidence that could connect him to a double murder committed last year.

Hernandez is already charged in the death of his friend earlier in June. He pleaded not guilty and requested bail but a judge denied it.

Prosecutors say they have ammunition, surveillance video and a piece of gum found in his home to tie him to his friend's death.

Hernandez was released from the New England Patriots earlier this week.