Exploding stars created the calcium in our bones and teeth, study says 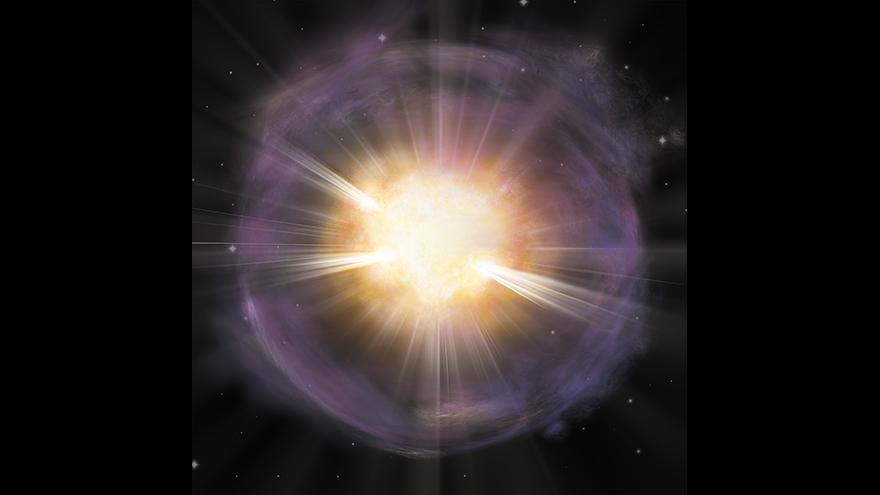 (CNN) -- The calcium in our bones and teeth likely came from stars exploding in supernovas and scattering this mineral across the universe in massive quantities, according to a new study.

We truly are made of star stuff, as famed astronomer Carl Sagan once said.

In fact, half of the calcium in the universe likely came from calcium-rich supernovae. But these explosions have turned out to be incredibly rare events that scientists have had difficulty observing and analyzing, so they weren't sure how the calcium was created.

Explosions and mergers of stars are also known to create other heavy elements, like gold and platinum. But the calcium has presented more of a mystery.

That changed when a global team of almost 70 scientists from around the world collaborated after receiving a tip from an amateur astronomer.The study published Wednesday in The Astrophysical Journal.

In April 2019, Joel Shepherd observed a bright burst as he observed the spiral galaxy called Messier 100, which is 55 million light-years away, through his telescope. He also spied a dot that was bright orange. Shepherd shared his observation with the astronomy community through a survey.

The news spread like wildfire among the community and telescopes from across the world were aimed at the galaxy and its anomaly. The event was named SN2019ehk.

NASA's orbiting Neil Gehrels Swift Observatory, the Lick Observatory in California and the W.M. Keck Observatory in Hawaii, which researchers at Northwestern University can access remotely, all were turned toward the anomaly.

They requested that Keck observe the event in optical light, while University of California Santa Barbara graduate student Daichi Hiramatsu used the Swift observatory to observe it in X-ray and ultraviolet light.

These follow-up observations of the event occurred about 10 hours after the supernova was detected, and X-ray emissions from the explosion were only visible for about five days before they disappeared from view.

"As this particular supernova revealed, when you discover something so young, you now have access to the final moments of the star's life right before explosion."

In fact, scientists had observed a calcium-rich supernova. The X-rays revealed intriguing new information about the explosion and the star itself before it exploded.

"The stars responsible for calcium-rich supernovae shed layers of material in the last months before explosion," Jacobson-Galan said. "The X-rays are the result of the explosion violently colliding with this ejected material and stimulating a brilliant burst of high energy photons."

The heat and pressure of the explosion actually drives the chemical reaction that creates calcium, the researchers said.

Usually, only a small amount of calcium is produced by each star as it burns through its supply of helium. However, when a calcium-rich supernova occurs, massive amounts of calcium are created and released in a matter of seconds.

"The explosion is trying to cool down," said Raffaella Margutti, senior study author and assistant professor of physics and astronomy in Northwestern's Weinberg College of Arts and Sciences. "It wants to give away its energy, and calcium emission is an efficient way to do that."

This occurs because the hot ball of material created by the explosion is trying to reach an equilibrium with its environment, Jacobson-Galan said.

"Calcium-rich supernovae produce just enough additional calcium in the explosion to provide an efficient means of emitting photons that in turn release heat," he said. "Nature chooses the path of least resistance and calcium provides that path when enough of it is present in a supernova."

And SN 2019ehk emitted the most calcium ever observed a single event, the researchers said.

"It wasn't just calcium rich," Margutti said. "It was the richest of the rich."

The Hubble Space Telescope has observed this galaxy for the last 25 years, but never actually registered the particular star that caused this calcium-rich explosion. That's likely because it was very faint, either a white dwarf, or a dead exploded core of a star, or a very low-mass star, Jacobson-Galan said.

"Without this explosion, you wouldn't know that anything was ever there," Margutti added. "Not even Hubble could see it."

That faint nature is also possibly true of calcium-rich supernovae as well, when compared to common supernovae that occur when massive stars die.

"This makes finding new calcium-rich supernovae difficult to see large distances from the Earth," Jacobson-Galan said. "Future telescope surveys that can scan the sky every night and see further into space will detect many more of these supernovae."

The scientitsts' finding suggested that the stars responsible for these explosions must be undergoing some sort of instability, which then causes the ejection of the star's outer layers right before explosion, he said.

The researchers are working on a follow-up study that includes how the supernova is evolving after the explosion.

They are also refocusing their search to include X-ray emissions from calcium-rich supernovae, which was entirely unexpected until this observation.

"We are designing observing strategies that would allow us to find a supernova when they are very young (and faint) and immediately repoint the X-ray spacecraft to catch the bright but short lived X-ray emission," Margutti said.