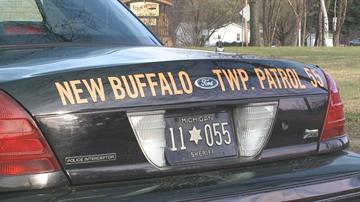 NEW BUFFALO, Mich. – Residents in New Buffalo are being warned about men posing as fake cops.  Two men were seen in the Parkview Drive neighborhood claiming to be officers from the Chicago Police Department Narcotics Unit.  One man who spoke to them said they were driving a blue minivan and parked right in front of his house.

“A fella got out and he flashed me a badge and he said ‘Chicago police officer’ and he asked me some questions about some drug activity in our neighborhood,” described Bob, who didn’t want to give his last name out of safety concerns.  “Probably talked to me for 15-minutes, he said he didn’t have the authority but he was here just checking up on some leads of some traffic going towards the Chicago area.”

Bob didn’t think much of the incident at the time, the men had even showed him a badge, but a few days later he heard a news report on the radio that shocked him.

“They said there’d been a series of robberies in Chicago with a blue minivan with two people identifying themselves as Chicago policeman,” Bob explained.  “I was on I-94 and I was about ready to slap on the brakes and turn around…I called my wife and then I got a hold of the sheriff’s department.”

The Berrien County Sheriff’s Department Deputy who answered told him they were unaware of any Chicago police officers in the area.  Also, his description of the badge the men had showed him didn’t match genuine Chicago police badges.

“It was an oval shaped badge, with ‘Chicago Police,’ with ‘Chicago’ on top,” Bob described.  “I talked to the sheriff and they said most of the Chicago police have a star type badge that’s round.”

Bob said that he didn’t get very good descriptions of the men nor did he take down their license plate number, because he thought they were real cops at the time.  However, he estimates the man who spoke to him to be average height and about 50-years-old.  The other man, he described as around 30-years-old and about 6’ tall with a black goatee.

“They were very pleasant to talk to, business like and they looked around, checked the backside of our house a bit,” Bob explained.

The two men also walked around and peered into the windows of a vacant house across the street.  Bob said he now fears the men were scouting for robbery targets.

“I had never locked my house, I started locking my house,” he explained.  “I notified my neighbors of what was happening in our neighborhood, to be sure that we didn’t have somebody setting us up and now it sounds like somebody’s setting us up to probably send somebody out to do a robbery.”

Officers with the Berrien County Sheriff’s Department said they weren’t sure if there’s any connection between the fake cops in New Buffalo and the robberies in Chicago involving suspects posing as cops.  But, deputies explained that people should be more vigilant as more and more vacation homes in New Buffalo are left empty during the winter.

“It changed my thoughts completely around,” Bob explained.  “Because we never worried about a thing back in this neighborhood.”

The Berrien County Sheriff’s Department said no break-ins or robberies have been reported since the incident.  If anyone is approached by someone identifying themselves as a police officer and feels even slightly suspicious, they are asked to take down any information they can and call police.