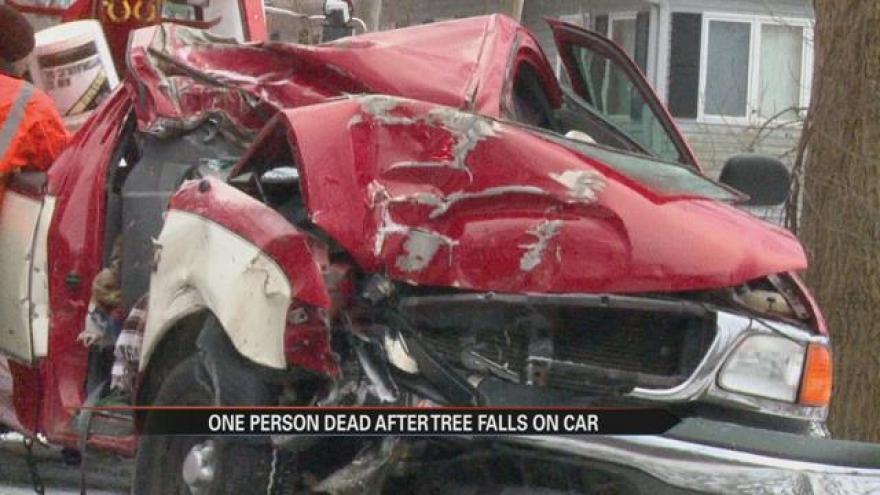 "It's the third time in my career that I've had a tree fall on a moving vehicle killing somebody," Cass County Sheriff Richard Behnke said.

The tragedy was discovered after a call came into the sheriff's department saying a tree was blocking part of M40 in Newberg Township.

"Upon arrival, officers found a car had struck a tree and realized it had been a traffic crash," Behnke said.

According to Behnke, the pickup truck was driving northbound on M40 around 6:30 Wednesday morning when a tree fell toward the road.

The tree hit the passenger side of the truck right as it drove by.

The truck then continued down the roadway for another 250 feet, crossing the yellow line, before crashing into another tree.

"The driver of the vehicle actually walked away from the vehicle, but was taken to Three Rivers Hospital for treatment," Behnke said.

But the passenger in the truck -- 16-year-old Nicholas Hewitt of Lansing, MI -- was killed when that tree happened to fall.

"In this case, obviously we have high winds, we just had a thaw, we just had a refreeze," Behnke said. "It creates the trees to be a little more brittle, so the chance of the trees breaking become higher."

Wind gusts topped 32 mph in nearby Three Rivers on Wednesday morning right around the time of the accident.

And throughout the day Wednesday, the trees near the accident scene could be heard creaking in the wind.

The driver of the truck is 52-year-old Michael Rinehart of Lansing. He was taken to a nearby hospital and treated for injuries.

The sheriff's department said both Hewitt and Rinehart were wearing seatbelts, and alcohol is not a factor in the crash.

The scene was cleared by mid-morning, but the threat remains hidden in plain sight.

"We've had reports of several trees down around the area; crossroads and such" Behnke said.