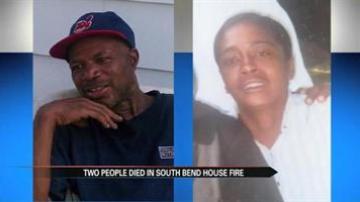 Metro Homicide brought three people in for questioning on Saturday but investigators are still trying to determine whether the fire is arson or not.

Commander Tim Corbett said, “I'm not calling this a homicide. It's going to be up to the coroner to do that after the autopsies are performed on Monday. Right now my unit is assisting the fire department, and South Bend Police Department Arson Unit who are investigating also.”

Angela Williams' cousin Tasha Tyce said the last time they heard from her she said she was going to a party.

Tyce said, “When you go visit your friend you don’t expect to burn up in a house.”

Tanya Fennessee said, “Angie was a loveable person. She had a heart. She loved everybody, and what happened to her, she didn’t deserve that. Somebody knows something. Please come forward so our family can have some closure."

Tyce and Fennessee said that Williams and Bailey were in the wrong place at the wrong time.

They believe someone intentionally set Bailey's home int he 2400 block of Kenwood Avenue on fire.

Tyce said, “There was no fight or anything just a lot of people there at the end of the night and somehow other two people were there. It wasn’t set by a candle or a cigarette, your normal cause, so what else could it be?”

She said her brother was well known in the community.

Verda Bailey said, “George was a loving person. He met no strangers. Everybody was his friend, and he was just an all around good guy.”

Bailey said she hasn't come to terms with this tragedy but if anyone wants to help her family pay for funeral costs they have a memorial set up at Alford's Mortuary in South Bend.

“It’s so tragic I have no idea. I just don’t like the way it looks. It looks like something just didn’t go right, something happened very badly.”

If you are a witness or know how this fire started call St. Joseph County Metro Homicide.