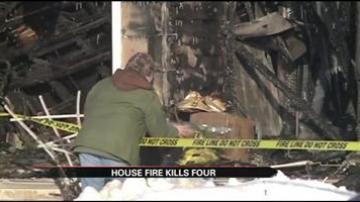 THREE OAKS, MI. -- Family and friends of those killed in the Three Oaks house fire are in disbelief.

Icicles, pots and pans, and the faint smell of smoke were some of the only things left from a fatal house fire on Elm Street in Three Oaks.

Hours after the flames were extinguished, only memories remain, memories still fresh in Sue Wilhelm’s mind.

“Anna went to school with my daughter. They were friends. They knew each other since kindergarten. We watched her grow up just like we did my daughter,” Wilhelm said.

Anna Peek, her boyfriend Kyle Tyler, and Anna’s grandparents were all dead by the time firefighters got inside the home.

The family dog and three cats were also killed.

They also described the scene that investigators saw.

“That it couldn’t have happened, that they had to get out. That it had to be some way they survived this. The disbelief, that not to lose one, but several people in one family. It’s just unbelievable,” Wilhelm said.

Police say they’re still trying to determine the cause, origin, and source of the fire, and say nothing about it looks suspicious right now.

But they will be bringing a canine in Friday to try and detect if any accelerants were used.

Meanwhile those close to the family and the rest of this small town continue to mourn these deaths.