Family of paralympian accused of murder speaks out 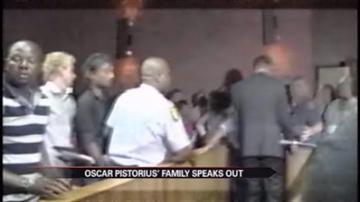 South African amputee and Olympian Oscar Pistorius is accused of murdering his girlfriend on Valentine's Day. His family insists the shooting was a terrible accident.

Pistorius himself has not said publicly what happened that night, but his family is supporting him saying they believe he mistook his girlfriend for an intruder.

That's when he shot her from behind a closed door.

"Oscar, as you can imagine, is also numb with shock and grief, and in total pain," said Arnold Pistorius, an uncle.

One of his friends has even come forward and said Pistorius called him after the shooting to tell him about the accident.

The victim's family has also offered up sympathy to the athlete and said they just want justice.