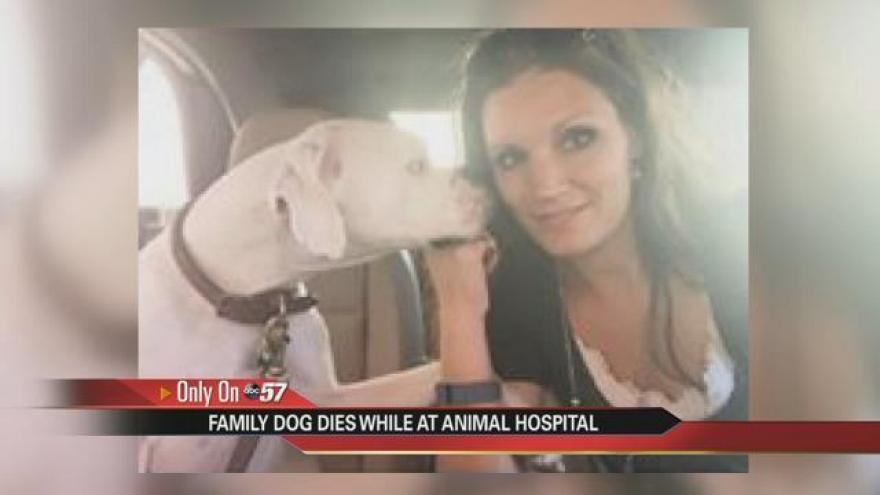 A Michiana family is taking action after they say their dog died in an animal hospital while being boarded.

The owners say their dog died of bloat in Morris Animal Hospital after being left alone for hours.

In the Csakany’s Goshen home, ashes and a collar are this is all that’s left of their dog Lily.

“Had I known, of course I would have never left her,” Joanne Csakany said.

Joanne and her husband Paul, Lily’s owners, say she died at Morris just days after they dropped her off, along with their two other dogs.

The Csakanys say they instructed the hospital to keep the dogs together while boarding.

“Every time I called to check on the reservation, I specified they all need to be stay together,” Joanne said.

The couple says LiIy had severe separation anxiety, but that Morris  separated her from her brothers anyways.

It was four days into their trip, and a few hours into Lily’s isolation, that the couple says the animal hospital called them.

“The first thing out of their mouths is that Lily is unresponsive,” Paul said.

Six-year-old Lily died of bloat shortly thereafter, according to her owners.

They say they were given different stories about why she was isolated.

“They never called us to ask permission to isolate them,” Paul said.

Now, the Csakany’s are taking action.

They say they’ve hired a lawyer, and have been requesting more info from the animal hospital.

“They had a vet on staff and they never even checked on the dog. How would they know the dog had bloat from looking? So what does that tell you? They’re not watching the animals that are in their care,” Paul said.

Morris Animal Hospital declined to interview but released a statement that says:

“The doctors and staff at Morris Animal Hospital have devoted their professional lives to the care of pets in our community. Out of respect for the privacy of our clients, it is our policy to not provide public comment on any client or patient. As pet owners ourselves, we know the pain of losing a member of the family. We share in the grief of any client who has unexpectedly lost a pet.”

However, the Csakany’s say Morris has lost their business for forever, because they’ve lost their beloved Lily.

“You leave her with someone that you trust, or you think you can trust because they’re professional and they have a veterinary staff, and it didn’t matter,” Joanne said.