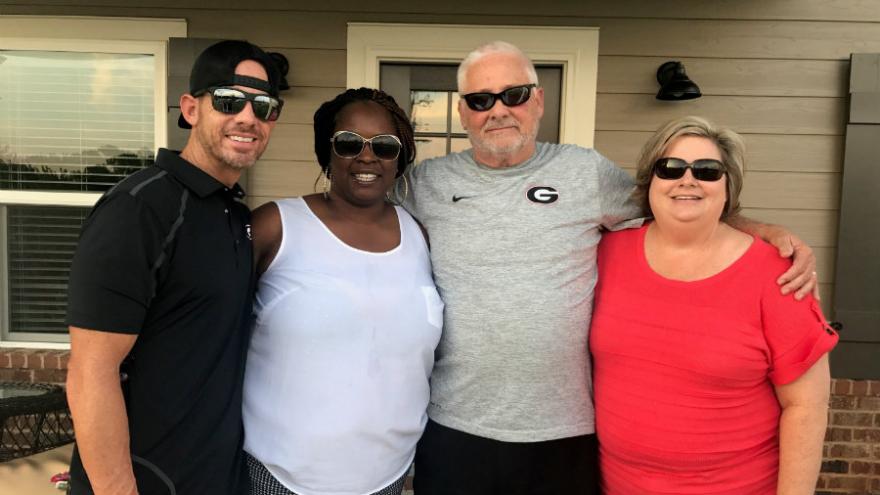 (CNN) -- Chris Wright was checking on his sick mother in early July when the nurse who was caring for her spoke those devastating words. "She didn't think my mom would make it through the day," Wright told CNN.

His mom, Judy Wright, was battling Parkinson's Disease. She made it through that day. But her son -- and Judy Wright's nursing aide, RonTunDe Hector -- knew she didn't have long.

To everyone's surprise, Chris' mother survived for three more days and passed away on Sunday. It was July 9, which happened to be Hector's birthday.

Some might say it was a coincidence that Chris Wright's mother died on that day -- but Wright and Hector say they don't believe in coincidences. It was divine intervention, they say, an intervention that began three years ago with a random act of kindness.

Kindness on the highway

The single mother of two boys was going through a divorce, she recalled, and money was tight.

"One Sunday I ran out of gas on the highway. I started walking with my gas can and I only had $5, and this guy pulled up and said, 'you need help?'" Hector said. "He filled up my car with gas and gave me $40. It was like God sent him my way."

That kind act stuck with Hector, who works as a hospice care aide at St. Mary's Hospital in Athens, Georgia.

She came to care for Judy Wright through her job at St. Mary's. When she showed up at the family's home for the first time, they felt a strong bond with her, Chris Wright said.

"My dad said, 'I feel better when she's here,'" Wright said, "so I set up a time for her and I to meet. We started talking about the care my mom needed and our faith, and she asked what church I went to."

"I said Cornerstone Church, and she said 'I met the nicest man from that church three years ago. He helped me in one of my hardest times,'" Wright recalled. "She got my attention because I was like 'I probably know him,' and then she says 'I ran out of gas and he filled up my tank and gave me $40.'"

That was when Wright realized they had already met.

"I'm already crying at that point and said 'RonTunDe, that was me,'" he said. "She said 'take off your hat' and saw it was me, and we just cried."

While caring for his mom, Hector became like a member of the family, Wright said. She told them it was her dream to go to nursing school, but that she didn't know how she was going to pay for it.

After Judy Wright's death, her family decided to repay the caretaker's kindness. In lieu of flowers, they asked mourners donate to a fund that they set up to help Hector pay for nursing school.

In less than a week, they raised over $8,000 for the aspiring nurse and surprised her with the news.

Their story went viral and the fund has now collected almost $30,000.

They see this as just the beginning of their story.

"She is driven to serve people and care for the sick," Wright said. "That's her calling. She's going to be a nurse. No doubt in my mind."

"I've always felt I had something to offer the world, I just needed a platform," Hector said.